The Serpent King by Jeff Zentner, reviewed by Dawn Finch 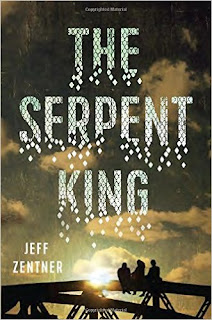 Dill's father is in jail for an unspeakable crime. Shunned by the neighbours in their small religious Tennessee town, Dill and his mother try to make ends meet. Dill’s only respite from poverty and prejudice are his two friends: Lydia and Travis. Travis is an oddball, finding sanctuary from his violent father in his obsession with an epic fantasy saga. Lydia is fast-talking and fiercely creative, pinning her hopes on her achingly cool fashion blog. Dill fears his heart will break when she escapes to a better life in New York.

Dill wants to get through his final year of high school in one piece. But there’s a dark secret at the heart of his family, a serpent poisoning his blood, filling him with despair. Dill must confront this legacy of madness and desperation before it tears him apart.


Jeff Zentner is a writer that you may not have yet come across as The Serpent King is his first foray into writing for young adults. Zentner lives in Nashville, Tennessee and his early career placed him firmly in the music industry, but time spent volunteering at music camps for teens steered him in the direction of writing for them. Given his background as a recording artist, I must confess to some sceptisim about this debut novel, but I am happy to admit that I was wrong - those years writing lyrics have given the author the skills he needed to weave some very elegant prose.

Serpent King is a remarkably talented bit of writing. The atmospheric descriptions of the small town where Dill, Travis and Lydia live provide the backdrop for a story that is at times achingly beautiful, and others suffocatingly enclosed. Zentner guides us through an often surreal world of poverty, wealth, isolation, and strange and obsessive religious beliefs. Thanks to Zentner's deft writing style, the town feels incredibly real - we can almost walk the streets for ourselves and step into the lives of the characters.

Description and language never take over though, the real master here is Zentner's instinctive grasp of natural dialogue. He has captured the characters of Dill, Travis and Lydia so well that we walk in their shoes and completely understand who they are. The handling of the relationships between the three central characters is beautifully done and, even when the story takes darker turns, the sentiment never becomes mawkish or glib.

I loved this book, and don't mind admitting that I was very pleased to see that it had made it onto the nomination list for the 2017 Carnegie Medal. Zentner is being hailed by the US press as the "next John Green" and, as with Green's books, you will need a box of tissues for some of the truly heartbreaking moments in Serpent King, but I think that the comparison should end there. I feel that where Zentner rises above many writers of this ilk is in his mastery of dialogue. That time spent volunteering with young people has clearly not been wasted as he really does know how young people speak to each other, and how they relate the complexities of their lives.

The Serpent King feels like a window into the lives of three young people who live in both ordinary, and extraordinary times, and I enjoyed it a great deal.

Dawn Finch is a children's writer and librarian and 2016 President of the Chartered Institute of Library and Information Professionals (CILIP), and member of the Society of Authors' CWIG committee.
www.dawnfinch.com
@dawnafinch

Return to REVIEWS HOMEPAGE
Posted by Dawn McLachlan at 09:00 Permalink

Thanks for this review, Dawn. Not sure if I'd have noticed the title, but it seems to have a lot of good qualities. I think strong dialogue - or a voice, at least - has a way of welcoming teen readers into a book.

Good dialogue can make a huge difference to any book.