CHRISTMAS IS ALMOST HERE SO AWFULLY BIG REVIEWS IS TAKING A SHORT BREAK. WE'LL BE BACK AGAIN AT THE START OF JANUARY 2017

UNTIL THEN, MUCH HAPPY READING TO YOU ALL,
AND THANKS TO ALL THE AWFULLY BIG (AND BRILLIANT) REVIEWERS
FOR ALL THEIR POSTS DURING 2016.

I've been looking forward enormously to the second instalment of Inbali Iserles' magical series FOXCRAFT, and from the moment I dived into the first chapter of Book Two, THE ELDERS, I knew the wait had been worth it. It's the kind of story that starts with an earthquake - or at least, the mystical tremor of malinta in the ground beneath Isla's paws - and builds to a spectacular climax. 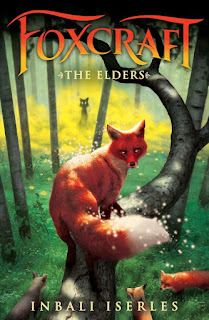 When we left her at the end of Book One (THE TAKEN), Isla - a former urban fox whose family were torn from her in a brutal act of violence - was venturing into the unknown Wildlands in search of her lost brother Pirie. She's little more than a cub, but Isla is blessed - or perhaps cursed - with a strong talent for Foxcraft, the magic that enables foxes to vanish, to mimic other creatures, or even to shapeshift. Foxcraft itself is an enthralling and exciting creation - one that is entirely believable to fox-watchers - and Iserles does not flinch from giving her magic a bad side. Like all strong charms, there are negative consequences to using Foxcraft's power, and Isla finds out much more about those  downsides in this breathlessly-paced adventure.
In Book One, Isla managed to shake off the charismatic, artful, but treacherous Siffrin - my favourite character of the series. But as Book Two opens, she is responding to the scream of a fox in distress, and when she runs to his rescue, she soon finds herself reluctantly entangled with another young fox, Haiki. He too is searching for his lost family, and he wants them both to travel together in search of the legendary Elders. Isla is not so sure - but Haiki soon proves a loyal and dependable companion, even if his cowardice sometimes gets the better of him.

Isla and Haiki journey in search of their families through forest, river, cliff and wasteland, and their trials are more than enough to keep a reader on the edge of her seat. They face dogs, coyotes and 'furless' hunters - but their most fearsome enemies have followed Isla since Book One: the Taken, mindless slaves of the sinister and unseen Mage. These menacing, relentless, yet strangely pitiable foxes pursue Isla and Haiki with barely a let-up, and our heroes' escapes are frequent, terrifying and breathtakingly narrow.

Iserles writes landscape into life, and populates it with characters who range from endearing to terrifying, but who are always multidimensional and real. The skulk who take in Isla and Haiki at a moment of extreme danger are a family you can instantly love, with all the personalities and conflicts of any family. I loved them all, from the weakling Mox to his grumpy grandmothers, and my heart was in my mouth as the Mage's hench-foxes prowled ever-closer. Two of the family, Tao and Simmi, join Isla and Haiki in their quest to find help and foxcraft-skills from the Elders; as a crisis forces them to set out from the safety of their den, the book begins to climb towards its chilling, thrilling denouement.

Inbali Iserles has created a world of incredible beauty, terror and believable magic. The sheer physicality of the descriptive writing takes the reader directly into the mind and skin of a fox. I could feel the frost on my paws - and that spine-tingling quiver of the earth at the summer malinta, when day and night are in balance. I don't think it's a spoiler to say that Isla and Haiki find the Elders at the very moment it matters - but they find much, much more, and not all of it what they hoped for.

In this second instalment we discover more about Foxcraft itself, and about the dreadful Mage and his motives. The horrors of this 'Tailless Seer' are creeping remorselessly across the land, and there is a distinct sense that time is running out for all foxes.

More happily, I am delighted to say, we meet charming, conflicted Siffrin again.

There are three books in the Foxcraft series. I'm back to waiting, and I'm more impatient than ever.

Return to REVIEWS HOMEPAGE
Posted by Gillian Philip at 00:01 Permalink

The fox world in the first book is so beautifully and scarily created, so it is good to hear about this new title.

The fox world in the first book is so beautifully and scarily created, so it is good to hear about this new title.