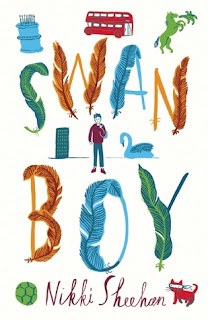 This is a story about bullying, about identity, about caring for your little brother, about loss and grief, about a mad but caring teacher – and about some swans.

Still devastated by the sudden loss of his father, Johnny has had to leave his childhood home and move to a tiny high-rise flat with his mother and brother Mojo.  Even worse, he has to start a new school.  All he wants to do is fit in, but he is targeted by a gang of bullies, led by a small, but particularly nasty Liam.  When Liam is attacked by a swan while in the process of tormenting Johnny, a new nick-name is bandied about the school by all those who’d rather it was Johnny being bullied than them – Swan Boy.

But Johnny felt something – a connection with the swan. Yet exploring this further would mean not fitting in, so he tries to deny it.  At the same time, he shuns any attempt at friendship from another boy being bullied.  He even starts being nasty to the little brother he’s supposed to be taking care of – because that is what is expected of teenagers.

Then, horror of horrors, Johnny is invited to partake in a dance for the school as a way of getting out of litter duty. Bad enough, without the fact that the whole gang of bullies are involved as well.  Then, he is given the leading role in the production of none other than Swan Lake.

This is where the mad but big-hearted teacher comes in, trying to introduce the ‘hopeless cases’ to something as completely not fitting in as dance.  At the same time, the connection between Johnny and the swan is growing until he feels just like the prince in swan lake – turning into a swan.

As Johnny denies who he is in order to fit, he finds himself hurting others and racked with guilt.  Then his little brother Mojo, having his own problems at junior school, comes out with a devastating secret.

Yet, throughout this journey of self-discovery and confusion, it is obvious that Johnny and his family are close.  He cares deeply for Mojo and his struggling mother obviously cares deeply for them both – she too is coping with grief.  For me this made a refreshing change from the uncaring or absent parent and somehow made Johnny’s plight more profound.

It’s simply written, easy to read with bursts of unexpected humour.  It’s not a deep and gloomy book, but an uplifting one and I enjoyed it very much.

Return to REVIEWS HOMEPAGE
Posted by Jackie Marchant at 15:41 Permalink

Thanks, Jackie. Nikki's book sounds well worth reading, I feel that an "uplifting" of the spirit - especially for children & young people - is much needed right now.