A STERKARM TRYST by Susan Price, reviewed by Penny Dolan 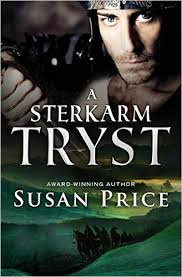 Susan Price’s long-awaited YA novel A STERKARM TRYST has now been published.

So, because I loved the world of the 16th Century Border Reivers that was brilliantly evoked in the two earlier titles - THE STERKARM HANDSHAKE and A STERKARM KISS - I bought a copy of this third novel, and was not disappointed.

Earlier events and confrontations are woven lightly into the plot, allowing new readers and re-readers slip easily into this particular storyline. This is science fiction with excellent time-travelling!

The trilogy has an interesting premise: James Windsor, a late 21st Century entrepreneur, intended to use his company’s Time Tube to colonise and exploit the unspoilt lands of the past.

Windsor thought his men would easily secure such a backward territory - and then they met the Sterkarms. Of all the feuding families in the Debatable Lands, the Sterkarms are the most treacherous: everyone knows that a Sterkarm handshake might promise friendship with the right hand while the left hand carries a blade to slide between your ribs.

At first, the Sterkarms treat the 21st century intruders with wary respect, deciding these strangers must be Elves. After all, they can appear and disappear, dress in unknown materials, and carry magic pills that take away pain. And from these "Elvenkind" springs the relationship that stands at the heart of the novels.

Andrea Mitchell, a 21st Century anthropologist, finds the love of her life in Per Sterkarm, the family heir, and at the start of THE STERKARM TRYST, she has come through time to her lover again, though uncertain of any welcome.

Known as his "Entraya", his Elf-May, she has a hard task. She has to warn Per and the Sterkarm family that a deadly new enemy has entered their lands. Windsor has time-travelled a group of Sterkarms from an almost parallel time dimension into this one. These are warriors who know this wild landscape as they do, and who fight with matching ferocity and who look just as they do. They will know all the Sterkarm tricks, and Windsor is behind them.

How can Andrea even explain this phenomenon?

How can a Sterkarm attack another to whom - it seems - they owe loyalty?

And how, I wondered, can a writer manage two almost-identical casts?

Susan Price does. Carefully, scene by scene, she moves the action forward, resolving what the reader wants resolved, and ending with treachery getting what it deserves. The headings keep the story straight and satisfying in its conclusions.

However, I must say that the plot was not the only thing that made A STERKARM TRYST a compelling experience for me. Within the storytelling, I heard rich echoes of the traditions, superstitions and legends of the Border Ballads, as well as the languages and voices of the region and its past. Humour is there too, within the pages, as well as moments when the differences between the present and the past are suddenly very evident.

Moreover, the dramatic landscape of the book is recognisably that of the Borders, an area of wild uplands and uncertain weather, a place where cattle-raids were then part of the culture, and where hunger was a constant threat.

I enjoyed being within that way of life, following the descriptions of an active community and culture, along with glimpses of cooking methods, housekeeping and textiles, herbal lore, fear and superstition. Captured in the writing too, was the importance of respectful behaviour and right words and acting according to your status: the sense of a time and place where any perceived insult might mean death.

A STERKARM TRYST feels a very physical story. It moves through camps and hovels and crowded stone towers, past the stink of unwashed clothes and the gutting of meat and the hard lives and gory deaths of men and women: this is not a benign or moral fairy-tale. Besides, survival depends on a reputation for cunning and treachery, especially when there are two lots of Sterkarms riding out, as well as Windsor’s thugs and their 21st Century weapons.

Yet, reading the book from the comfort of home - and despite all the violence - it is hard not to admire the warmth and energy and the bonds of family loyalty and protection within the Sterkarm clan. Like Andrea/Entraya, I found the Sterkarms beguiling, and welcomed the many characters that Susan Price has created – Toorkild, Lady Isobel, Sweet Milk, Gobby, Mistress Crosar, Joan Grannam, Davy, Cho and more - each one entirely convincing, for all their faults.

Especially that blue-eyed, fair-haired hero, Per May Sterkarm. And Cuddy. I have to mention them. Read the book and you’ll discover why.

All three titles, including THE STERKARM TRYST, are published by OpenPress in a handsomely-matching set of covers or as e-books. 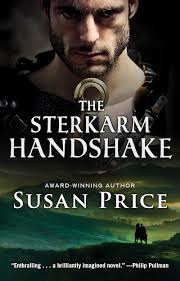 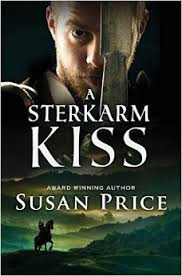 I'm really looking forward to reading this! But do I need to 'revise' by reading the other two again first? (it's been such a long time.)
The new covers are fabulous!

After having owned the first 2 books for years before a sterkarm tryst came out, I was really looking forward to reading it. Unfortunately I was a little underwhelmed at first, Susan seems to have changed the way she writes this world making her language simpler, dumbing down the characters. Regardless I did find myself engrossed in the story as I read further into the book. My only other problem is that at the end of chapter 34 Susan has 16th side b Gobby and Ingram alive and well despite them having been killed and buried in a sterkarm kiss.