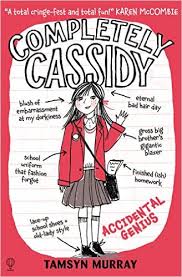 Completely Cassidy is a fabulous book filled with such humour, warmth and heart.  Straight away you’re drawn into Cassidy’s world, sharing her hopes and fears as she starts secondary school.  And you can’t help but feel sorry for her. On her first day she has to turn up wearing her ‘stinky’ brother’s hand-me-down blazer and an old pair of shoes since her dog ate her new ones.

Cassidy is desperate to shine at school. At first she thinks she’ll have a go at the talent show. Her talents consist of being able to lick her elbow (which is actually harder than it sounds – and yes, I have tried!), annoying her older brother and being a snake charmer - although she’s scared of snakes so she might have to be a hamster charmer instead.

But then she takes a test that is so hard she has to guess the answers randomly, and suddenly the whole school seems to know who she is. Her results make her one of the cleverest students St Jude’s has ever seen. Her pregnant mother and Elvis impersonator dad are over the moon.  And now she gets to join a quiz team alongside the boy she fancies. But as you can imagine, life doesn’t run quite as smoothly as she’d like…

All the characters are so well thought out, often surprising you. And there are so many funny touches in this story. There’s a toe-curling incident with a dog and a pair of knickers. And Cassidy actually writes to the prime minister hoping for a return to the Victorian school leaving age so she can go down a coal mine rather than have double maths.

Tamsyn Murray has created a fabulously fun heroine with a really strong voice. You root for Cassidy as she navigates friendships, family, school and haircuts. It's the perfect book for children about to start secondary school as I bet many will see a little bit of themselves in Cassidy.


Return to REVIEWS HOMEPAGE
Posted by Tamsin Cooke at 07:00 Permalink