This isn't a new book; it came out in 2008. But I've only just read it, having acquired it in a book sale. I do remember reading at the time about Michael Morpurgo's stint as Writer in Residence at the Savoy Hotel - nice work if you can get it, I thought with just a hint of bright green envy.

The idea for the book came from a large sculpture of a black cat, which Morpurgo was intrigued to see in a glass showcase. When he made enquiries, he was told that almost a hundred years before, thirteen men had sat down to a dinner party at the Savoy. 'One of them scoffed loudly at the suggestion that thirteen might be an unlucky number, said it was so much tosh. Only a few weeks later, he was shot down in his office in Johannesburg, South Africa.' After that, the Savoy decided never to take such a risk again. If there are thirteen people for dinner, there is always a fourteenth chair - on which sits the Savoy cat.

Morpurgo tells his stories quite quietly and gently. Yet there are almost always moments of great drama - often tragedy - and this story is no exception.

Johnnie Trott is a bell boy, an orphan. He loves his job, and he is chosen to carry the Countess Kandinsky's luggage to her room when she arrives for a prolonged stay. he bonds with her cat, the elegant, aristocratic Kaspar, Prince of Cats, and the Countess, who is an opera singer, grows fond of him and he of her - in his heart, he thinks of her as a replacement mother. But she is killed in a tragic accident, and he is devastated.

It's up to him to take care of Kaspar, and he does his best; but Kaspar pines for his mistress and refuses to eat. At this point another significant character comes onto the scene - Lizziebeth, an American heiress.

Well, the story goes on. Lizziebeth and Johnnie become friends. Then, when she and her family are due to go back to America, she tells him in great excitement that they are to travel on a wonderful new ship. It's name? Well, it's called the Titanic... 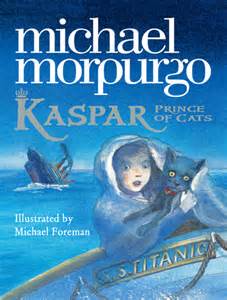 It's an exciting story that gallops along and is peopled by colourful, interesting characters. It's illustrated by the wonderful Michael Foreman, who has illustrated so many of Morpurgo's books, and this adds greatly to its charm. His pictures of the shipwreck are stunning, but so is the detail of the scenes in the hotel and in London. A lovely book.

Return to REVIEWS HOMEPAGE
Posted by Sue Purkiss at 11:09 Permalink