THE RED SHOE by Ursula Dubosarsky. Reviewed by Ann Turnbull. 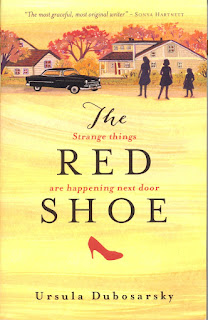 I loved this book. It's a complex, funny, sad but ultimately hopeful family story.

Three sisters are living in Sydney in 1954. Elizabeth is fifteen, Frances eleven, and Matilda six. Their father, who was traumatised by his experiences during the war, is in the merchant navy. The main viewpoint is Matilda's, and the author captures perfectly the small but utterly absorbing world of the six-year-old. But behind the ordinary events of childhood (playing in the garden, collecting snails, spying on the mysterious people who have moved in next door) there is a sense of unease, of something wrong in the family, something unspoken. Why is Elizabeth having a nervous breakdown? Why is Uncle Paul so often in the house when Daddy is away? And when will Daddy come home?

Matilda has recently acquired an imaginary companion, Floreal, whose remarks and questions are always unsettling. She doesn't like Floreal and wishes he would go back into the radio, where he came from. Matilda has seen and overheard things, some of which she has repressed - but not so deeply that Floreal can't reach them. At last the memories begin to force their way up and to make sense. And it's Matilda who, in the end, reveals a shocking truth.

Interspersed with the chapters are excerpts from Sydney newspapers of the time which relate to some of the background events in the story and help to build the atmosphere: items about children with polio, the H-bomb, Russian spies, diplomatic visits. The story is set very precisely around Easter 1954, and details of real events are woven into the narrative.

It's difficult to say what age this book is for. Perhaps about twelve - but with no upper age limit. The best thing would be just to have a copy around for anyone who wants to read it. For me, the full complexity of the plot structure was not apparent until I read the story for a second time - and enjoyed and admired it even more. This is a book to keep, share and re-read.

Can we send you a book for review?

Sorry, but for this particular blog I prefer to choose my own favourites, so the answer is no. However you may find that some of the other contributors to this blog would like to receive a book. Thank you for the offer.

However you may find that some of the other contributors to this blog would like to receive a book. Thank you for the offer.