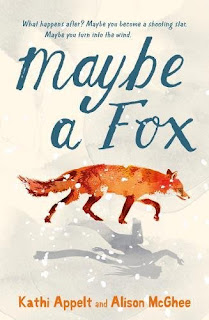 I wasn't sure if I would like this book. I feared it might be sentimental, with its themes of death and grieving combined with animal spirits. It does balance on the edge - and personally I would have cut the last chapter altogether. But what I loved about the story was its immersion in the imaginative world of children.

Place is all-important here: the deep mysterious woods of snowy Vermont. Sisters Sylvie and Jules, aged twelve and eleven, live in these woods with their father; their mother died some years ago. Sylvie loves to run; but there's something driven about her running, her desire to go ever faster. Jules collects rocks - she's a budding geologist - and some of these rocks are special: the children call them 'wish rocks'. There are neighbours: Mrs Harless, with her local stories and legends; the girls' school friend, Sam; and Sam's grown-up brother, Elk, who fought in Afghanistan and lost his best friend there. The woods are also home to animals: foxes, bears, and perhaps the mysterious catamount that Sam longs to see.

The girls' father has given them rules they call the 'Do Nots' - the most important being 'Do not ever go to the Slip.' The Slip is a place where the river vanishes suddenly into a deep pool in an underground cave, re-emerging some distance away. Nothing that falls into the Slip can escape. The sisters - despite the 'Do Nots' - often take wish rocks to the Slip and throw them in. Behind all their games is a longing for things to be as they were, and for them to be reunited with their lost mother.

Running parallel to the story of Jules and Sylvie is that of Senna, a fox cub possessed of a mysterious empathy with humans, whose fate is entwined with Sylvie's. Senna, driven by her intuition, roams the woods in search of the human whose destiny she shares.

This is a magical story with a setting reminiscent of the snowy forests of European fairy tales. The characters, however, are real and modern, and the children's quarrels and obsessions ring true, giving a solid reality to semi-magical events. Its themes of loss and longing are universal, and the link with animals will have undoubted appeal for children.