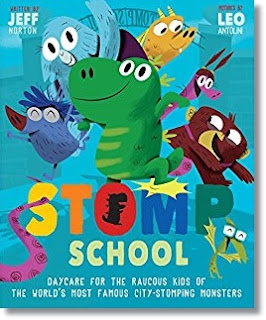 Rikki, the little kaiju (ky-joo) - from the Japanese: 'A strange beast' - loves building things with his bricks. When we first meet Rikki, he's just putting the finishing touches to his 'biggest, best city ever', and he can't wait to show his daddy. Unfortunately for Rikki, his little brother, Torik wants to play too - and we all know what monsters do to cities. Before Rikki has chance to stop him, Torik sends building bricks flying everywhere as he stomps, crushes and smashes the city to pieces. Torik has a great time, but Rikki isn't happy at all and stomps his foot on the floor.

On hearing this big stomp, Dad realises that it's time for Rikki to go to stomp school where he will get to play and interact with other little monsters. 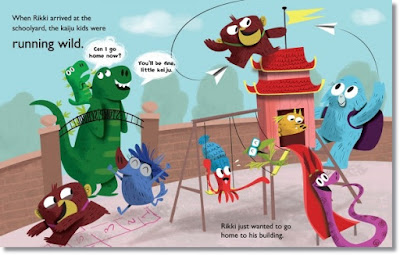 Rikki feels nervous on his first day at Stomp School but he soon fits in with the other little kaiju and has them excitedly building a huge city together with all of the building blocks. As soon as they've finished of course, the other little monsters want to knock it down. Once again, Rikki is frustrated that he won't be able to show Dad what he's built and stomps his foot. Their teacher congratulates Rikki on his stomping but tells them that before they stomp, it's time to paint so that they can all show their parents what they have built. Rikki has lots of fun painting but when he's finished that quiet activity he's ready for a monster rampage and leads his new friends as they smash and crash the city together.

This picture book, written by Jeff Norton and illustrated by Leo Antolini is bold, bright, lots of fun and is sure to appeal to little monsters everywhere. A couple of cutaway pages, peep-through holes and a large fold out page add extra interest for young children, and they will love the different monsters - all of which have their own personal traits (nicely detailed on the title page).

Return to REVIEWS HOMEPAGE
Posted by Damian Harvey at 08:00 Permalink