Where to begin? As ever, with full disclosure. I met Pam Smy when we moved to Cambridge in 2010. Before that, I knew her as the wonderful illustrator of very good books by my friend Linda Newbery: Lob and The Brockenspectre. And again, you will have to believe me when I say that I would not be reviewing Thornhill if I didn't want everyone to find it for themselves. It really is both too good and too unusual to miss. If it wins for Pam Smy BOTH the Carnegie and the Greenaway medals next year, I reckon that would be perfectly fair. It's an extraordinary book in very many ways, and though there are things in it which are familiar to readers of both ghost stories and children's books, there is much that is strange and new. 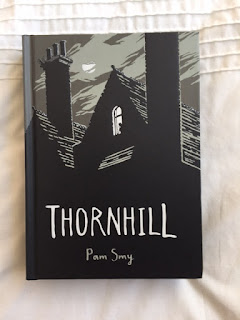 The first thing to say about Thornhill is this: it's a marvellous example of what a publisher can do with a book if they make the effort. It's a huge, handsome volume. It's heavy. It's meant to be heavy because it's full of darkness and sadness and they weigh a lot. It costs only £14.99, which is amazingly good value. Do buy the hardback. The paperback will be lovely but not the same. The hardness and stiffness of the volume is important. Many congratulations to David Fickling Books for such a brilliant production.

There are black pages throughout the book, dividing the modern sections from those in the past and these, oddly, aren't empty at all, but full of remembered images of what you've just read or seen in the last section.  Having the same person in charge of both the words and the illustrations means there's a solid framework that runs through the book. The artist knows exactly what must and what must not be shown; the writer knows just what to say to tell us enough, but not too much. 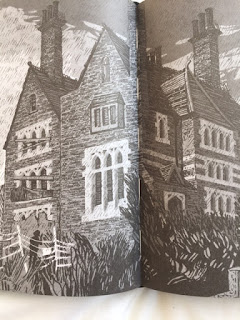 The photos I've taken to illustrate this post are very amateurish and I apologise for them. They don't do Smy's pictures any kind of justice but they're better than nothing. Above is a picture of Thornhill. It's an orphanage and the events which concern this story take place in 1982, when a girl called Mary lives there. We come to Thornhill as it's being taken out of use. The girls living there are on the point of being sent to other homes, or foster homes. The staff show differing degrees of sympathy and care but on the whole it's a dreadful place. Mary is being seriously bullied. She is an elective mute and her life is a misery. I won't say more than that. We read Mary's story in her own words. 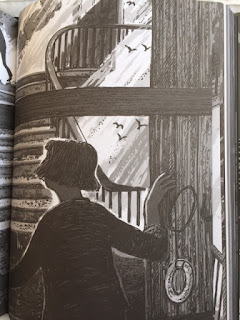 The wordless illustrations concern Ella in the present day. We learn that she and her father (her mother is either dead or has abandoned the family. We don't really learn which) have just moved into a  house which is opposite the derelict orphanage. One day, Ella sees a girl in the overgrown garden and her curiosity and loneliness (we never see her father or any other person except in the street outside) send her exploring in the wilderness. She comes across in the present the place where Mary in the past used to hide from her tormentor.  Ella also finds objects that Mary has left behind, and she takes them home with her... 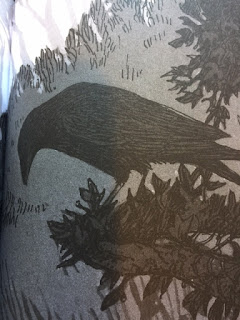 The two stories unwind in parallel. Ella watches Mary. What she sees and how it's shown to us adds a background to the parts of the story written from Mary's point of view. Ella grows closer and closer to this girl from the past. She finds a diary written by Mary. Meanwhile,  in 1982, Mary's situation grows worse and worse. Above is a picture of a bird. It's sinister, but quite gentle compared to the images of dolls and bits of dolls that appear in these pages. Smy is very good indeed at terrifying us, using nothing more than black and white and shades of grey and twisting ordinary things into nightmares with the greatest subtlety. There are overt references to The Secret Garden by Frances Hodgson Burnett and to any reader who knows Jane Eyre, Thornhill is a clear echo of Thornfield Hall. Dolls, as we know, have a long history in such stories. They are, because they are at the same time like us and very much not like us, deeply spooky.

I'm trying hard not to give anything away which will spoil the story, but be prepared. Do not expect a happy ending. Instead, we are given a kind of repeating vista of unhappiness, stretching into the future. It's a bold creative decision, and it pays off. This book doesn't pull any punches. Going back through the images, there is much that fills in a background of poverty and neglect. We know, because there are stories about it every day in our media, what can go on in care homes, orphanages and the like, and even without any hint of sexual abuse, this story shows up bullying for what it is: a daily source of unutterable misery for many children, and one which is only now beginning to be talked about seriously and properly. The distress of all the bullied children in the world is immeasurable and it's to Smy's credit that she's chosen to apply her great gifts to exposing some of it in this beautiful book.

Wonderful review for a totally amazing book. Such a thrill to have it.

This looks just fascinating. Thanks, Adele.