My usual  disclaimers: I have met Jackie Morris, Dianne Hofmeyer and Jane Ray and will be meeting James Mayhew in November. Again, you must believe me when I say I wouldn't review any book I didn't love. My life is too short for adverse criticism. If I don't like a book, I don't read it.

But as soon as I heard about Mrs Noah's Pockets, I was curious and asked for a copy to review. My interest sprang from the fact that this was a book by two people, each of whom is both a writer and an artist. Anyone who knows James Mayhew's work will see at once that this book is a new departure, using collage and great washes of colour. I was struck at once by the vigour and exuberance  of this art work. Morris's words are very spare and poetic without being  cutesy or over lyrical. The text begins : "IT RAINED."  Everything follows from that. The opening spread is so spectacular that I am not showing it. It makes you catch your breath. A washed- out landscape of hills and one tree is being thoroughly soaked. There's a figure in red standing at the top of a hill. That's Mrs Noah.  Mr Noah also sees the water rising and begins building an Ark. This is Bible Story Retelling territory, but appearances can be deceptive... 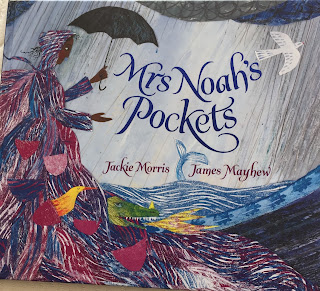 As her husband deals with the Ark, Mrs Noah has her own  agenda. She goes walking "in Mythico Woods, on errands of her own." 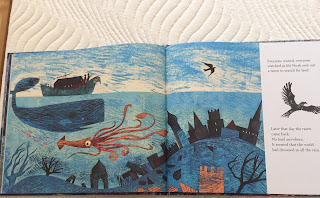 Mr Noah thinks she's making curtains for the Ark when she's busy at her sewing machine, but she says nothing, and when all the animals are safely gathered in, we learn that she has made herself a coat with very, very deep pockets. 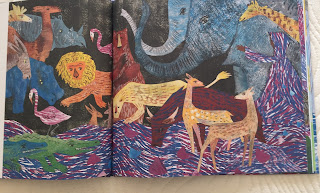 By this time, readers are desperate to know WHAT is Mrs Noah up to? What is in those deep pockets?  At night, Mrs Noah tells stories of mythical creatures, such as unicorns, dragons, phoenixes and many others. When they come to land at last and the real animals are released, Mrs. Noah sets free the contents of her magical pockets: all the mythical creatures whose tales she's been telling the children during the Ark's long voyage. The illustrations in this  book are absolutely beautiful and appropriate for the story, which is a masterpiece of economy and imagination. It's also just the right length for anyone looking for a perfect bedtime story. Because it's a book full of marvels, I think MARVELLOUS is the right word to describe it. 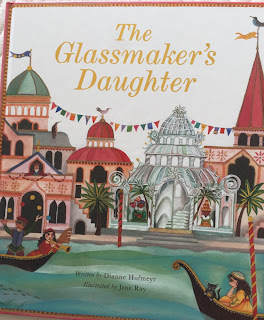 THE GLASSMAKER'S DAUGHTER is another delightful story from the team that brought you the glorious ZERAFFA GIRAFFE. This time the setting is Venice. This is a city Jane Ray has often depicted before and it seems to be exactly in tune with her gift for decoration and ornamentation and sumptuous colour. 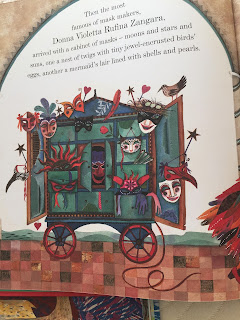 The story concerns Daniela, who, in the tradition of many a storybook princess, is miserable, bored and sulky. Her glassmaker father creates a glass palace and promises it  to anyone who can make her smile.  Various people try various methods but nothing works until a young man called Angelo comes up with a brilliant idea...
In this book too, there's a dramatic spread which is a dazzling surprise and of course, by the end Daniela is laughing so happily that the entire city laughs with her.  It's a very satisfying conclusion and looking at the details on every spread will keep young readers satisfied for a long time. Many congratulations to this very engaging partnership!

Published in hardback by Frances Lincoln. £12.99

Return to REVIEWS HOMEPAGE
Posted by adele at 08:30 Permalink