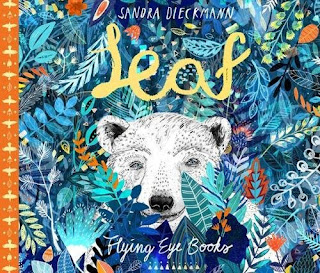 “Crow saw it first. The strange white creature carried upon the dark waves towards the shore.”

This picture book opens with the unexpected arrival of a polar bear, who is mistrusted by the animals of the wild wood. They do not understand him. They are scared of him. The creature behaves in unusual ways, collecting leaves from all over their wood. What should they do?

The premise is deceptively simple but brings with it deeper questions. How do we treat those who move into our home, who are different, who do not behave as we do? The animals gather to discuss the creature every day ‘although no one was brave enough to talk to him.’ Because of his fondness for leaves, and also because the animals want him to leave, they name the creature Leaf.

This is reminiscent of another book, also published in 2017: Wishtree by Katherine Applegate. Based on similar themes, the word ‘LEAVE’ is inscribed into the trunk of the Wishtree when a Muslim family moves into the neighbourhood. We are invited in both books to consider our reaction to ‘otherness’.

One day, Leaf bursts through the trees covered in the leaves he has collected, and jumps off the edge of a hill, falling into a lake. It is the crows, in the illustrations, who follow Leaf back to his cave. If the reader looks closely, he will see that illustrator is showing us, with the lightest of touches, that the bear is crying.

The animals meet again. Now what should they do? Their attitudes are changing. The crows have sympathy for Leaf but the other animals still fear him. Nothing is agreed so nothing is decided.

Again, Leaf runs through the woods covered in leaves. Now he is more desperate, jumping over the cliff and into the sea. Finally, the crows take action: it is time to hear Leaf's story.

For the third and final time, all animals meet. They approach the bear. This time they all listen. At last they understand.

The bear had ‘drifted over from far across the sea, where the ice was melting.’ He had been launching himself into the air, covered in leaves, trying to fly home.

Here is our second theme: climate change. The initial illustration of the sad polar bear, arriving on a too-small piece of ice, has striking resemblances to the widely circulated photos of these creatures as their habitat disappears.

The animals now want to help Leaf to find his way home. Having learned the importance of listening to his story, this becomes part of their solution. After all, a story is a powerful thing.

Although the two themes — of displaced characters, of climate change —  are timely, the book seems timeless. Sandra Dieckmann’s illustrative style is dreamy, evoking the mood of fairy tales. She uses a refined color palette which complements the subject matter, and her combination of intricate techniques play with space and keep the eye moving around the page. Notably, Dieckmann uses more volume and lifelike details for the animals, changing point of view as the story progresses. In the distance, we often find the repeated outlines of faraway mountains, suggesting that beyond the wild wood is a bigger world.

The quote at the front of the book is significant: ‘Deeper meaning resides in the fairy tales told to me in my childhood than in the truth that is taught in life.’ — Friedrich Schiller.


Return to REVIEWS HOMEPAGE
Posted by Sarah Hammond at 00:58 Permalink