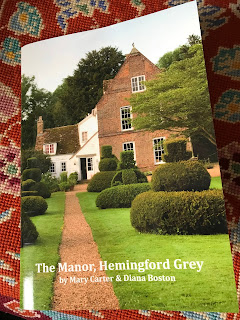 I hope readers of this blog will forgive me for the  kind of double whammy I'm presenting you with in this review.  My main aim  is to draw people's attention to this jewel of a house, and to a recent history of it, written partly by Mary Carter and partly by Diana Boston, who has been the guardian of the the place since the death of her mother-in-law, Lucy Boston in 1990.  Mary Carter's history was written in 1997, but is now published together with Diana's guide to the house, which makes the little pamphlet pictured above a must for anyone interested in this place. Copies are available for £5 from the shop at Hemingford Grey.

The Manor is one of the very oldest houses in the country and is mentioned in the Domesday Book. 900  years of human feelings and conversations: quarrels and kisses, tears and laughter,  have happened  here and must have imprinted themselves somehow on the fabric of the house. Many people have felt that it was haunted and even if traditional ghosts are not seen by everyone, the many young airmen who sat in the Music Room and listened to records on the gramophone, with its enormous trumpet, (and many of whom went on to die in defence of freedom in the Second World War) are still there in spirit in a way that's completely real. Here's a  photo from the booklet of the Music Room. 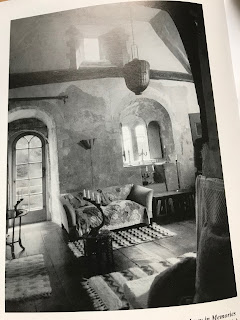 The piece I've added below was written so many years ago that I feel I can bring it out again for a different audience. I hope many readers of this particular blog will know the Green Knowe Books but if they don't, then I can't recommend them highly enough and you can by those at the shop too.

I have been back twice since I wrote this post. Once, on one of the coldest nights I can remember, we listened to ghost stories by M.R. James read to us by the light of candles by the wonderful actor,  Robert Lloyd Parry. The second time, Diana Boston herself (who tells us in the booklet that she's shown 80,000 people round the house) showed us (this was a second time for me) every one of Lucy Boston's beautiful, beautiful patchwork quilts. We put on white gloves to look at them and handle them and they are quite astonishingly lovely.

Lucy Boston was very lucky in her daughter-in-law. Diana Boston is the perfect caretaker for this magical house and her booklet  is a model of clear exposition and succinct and modest description. She doesn't say how much she's done towards the maintenance of the Manor, but she's the spirit of the place now and what I'd like to say to anyone reading this is: get in touch by phone and arrange for your own viewing. You won't regret it. The website is www.greenknowe.co.uk Do go and visit it...

If you park near St. James's Church in Hemingford Grey and walk along the towpath, you come across the Manor almost by accident. I was there on purpose. It's a place I've been longing to visit ever since I read my first Lucy Boston novel, decades ago. The Manor is Green Knowe, the house described so vividly in her children's books that I sort of felt I knew it already. On June 1st, on a mild and overcast day, my good friend Frances Wilson and I went to see the real thing. 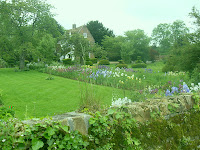 We walked all round the garden first. The topiary, cut into very Jubilee-appropriate crowns, orbs etc was started in the year of the Coronation. Every bush had bunting around it, and we were greeted by two lovely dogs who bounded over the grass to welcome us. 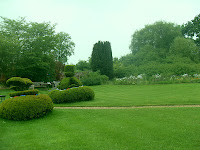 If you wanted an example of a perfect English domestic garden, this is it. Planted with care and devotion, tended with enormous love for decades, first by Lucy Boston herself and now by her daughter-in-law Diana Boston and a couple of very good gardeners, it is full of everything beautiful you can think of: roses in abundance, shrubs and flowering plants of every kind and in particular on the day we went, banks and banks of the most splendid irises. These are purple and what you think of when you think of irises, but there were bronze ones and underwear pink ones as well as white and gold and mixtures of bronze and purple...the varieties were astonishing to me at any rate. And there were masses and masses of them. The whole display is spectacular. Visit quickly if you want to catch them at their best but after they're done there will be the roses, some of which were already flowering profusely. 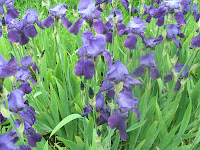 Diana Boston met us at the door. She is the widow of Peter Boston, who provided the extraordinarily evocative illustrations for the Green Knowe books. She was showing us round the house and on the day we were there, Frances and I were the only visitors,so it felt exactly as though we were guests at the house of a friend. Diana knows all there is to know about the Manor and lives there now, and the feeling you get as you step into it is precisely that: you're entering someone's home. It's been around since 1130 A.D, this house, and is one of the earliest domestic dwellings in England. It has been the background to words, deeds, thoughts, emotions, celebrations, bereavements, births, and gossip for over 900 years. The walls in most of the house are very thick indeed and have absorbed so much that you feel the place is crowded with memories. The hall has in it coats, wellies, umbrellas, and the normal paraphernalia of everyday life. It's a dignified and beautiful and ancient house but in no way a grand one. You have to watch your step sometimes and the rooms lead off one another in unexpected ways, but wherever you go, you see wonderful pictures, pretty ornaments and evidence of Lucy Boston's presence as well as that of her friend, Elizabeth Vellacott, the artist. The link goes to the Daily Telegraph obituary of this interesting woman who died as recently as 2002. 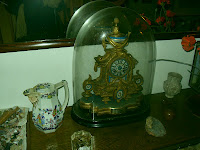 One of the main reasons I've long wanted to visit the Manor was because I knew that Lucy Boston, as well as writing enchanting books, also created patchwork quilts. Quilts are something of an obsession of mine. Almost my first book was called Apricots at Midnight and in it, each story relates to a patch in a quilt the narrator has made. The patchwork curtains in the living room were lovingly mended by Lucy Boston, and this started her on the making of her own quilts. She spent each winter putting together the most extraordinarily lovely and carefully-designed and worked-out patchworks. The one illustrated here has a pattern of appliqued stars and the phases of the moon.
Patchwork is a metaphor for a great many things, as well as being, when well done, both beautiful and useful. It's like writing books for instance: you have to pick which words go well next to which others, how the paragraphs are going to line up, how the structure of everything will fit together at the end. I found it thrilling to imagine Lucy Boston, sewing away by hand (you cannot see any stitches at all on the quilts without bringing your eyes practically up against the fabric and even then it's hard!) through the cold winter nights. Diana assured us that the house is still very cold when the temperature drops but blessedly cool in hot spells. It's the thick walls... Frances and Diana put on white gloves to show off every single quilt. These are awesome in the true and not the modern slangy meaning of the word. For anyone who loves such things Boston's works of art are absolutely worth the trip all on their own. 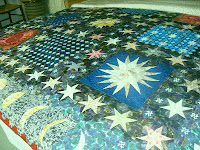 During the Second World War, Lucy Boston played gramophone records to young airmen, many of them still in their teens, who were stationed nearby and who used to come in a special bus to hear the music. Still in the room in which this happened, and in the photograph, you can see the records, all in boxes and in their buff paper sleeves, and it's an enormous collection. The old gramophone shown in the picture still works and Diana played us a piece of music (she chooses different pieces to play for each visit) which you can hear by following this link. When the high-ceilinged, silent, ancient room filled with these notes, a real chill came over me and I found myself on the edge of tears and with gooseflesh all over my arms. And yes, it was partly the sound, the notes, the melody, but it was also the ghosts of those young men, hearing that song, facing death daily, suddenly present where we were. It's not a moment I'll forget in a hurry. I do urge anyone who can to follow the link to Gladys Ripley's rendition of O peaceful England! on the truly magical You Tube. 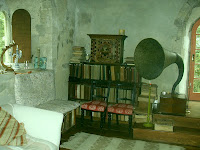 Readers of the Green Knowe novels will recognize the rocking horse and the picture of the toys in the trunk, brought to the house by children from other times and places. There's no room here to go into detail about them but they're the work of a truly remarkable woman and anyone who loves books with a proper sense of place, interesting characters and stories touched with the best kind of magic will love them. They are all on sale in the shop, of course, as are postcards of the garden and the patchworks and much more besides. Diana Boston explained to us why she hasn't gone the Disneyfied, theme-park route in the Manor. She has wanted to keep the place as it was, for all those who love the books: a home for real people who happen to share it with a multitude of benevolent ghosts. I'd like to thank Frances for driving me there and Diana for taking us round. She's the perfect guide and I can't think of a better place to visit if you're in the region. It's the very best kind of haunted house there is. 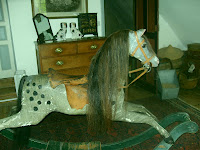 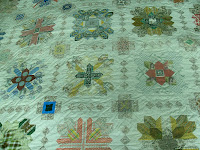 Return to REVIEWS HOMEPAGE
Posted by adele at 08:52 Permalink

An absolute delight of a post, Adele. I'm promising myself I must make plans to visit Hemingford Grey sometime this year, instead of sighing as I drive past on the A1M to London (or back!)