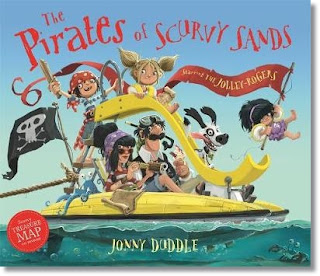 The Jolly Rogers make a welcome return in Jonny Duddle's latest picture book, The Pirates of the Scurvy Sands. Matilda lives in the modern day seaside town of Dull-on-Sea where it's bleak in midwinter but full of folk in the summer, playing on the beach and in the arcades.
Unlike most children Matilda has a young pirate boy named Jim Lad as a pen friend so she gets to go on exciting pirate adventures with him and the rest of the Jolly Roger family on their pirate ship.

When Matilda receives a message in a bottle from Jim (he doesn't have a mobile phone so it's the only way they can keep in touch) she learns that the Jolly Rogers are going on a special pirate trip and will be picking her up in the morning. Luckily, Matilda's Mum and Dad know that the pirates "aren't so bad" so they are happy to let her go with them to Scurvy Sands, a holiday resort that's only for pirates.

It doesn't take long for the other pirates children and their parents to realise that there's something not quit right about Matilda. She's too clean and polite, she doesn't eat shark's brains or maggoty biscuits. Her teeth are shiny and white and even her hair smells nice. Matilda has to do something to prove that she's not a land lubber so she leads Jack in a search for Mad Jack McMuddle's treasure.

The rhyming text for this book never seems forced - it's spot on and made for reading out loud. Children will love the familiar pirate themes and the way they have been cleverly mixed with the modern day.

This picture book was a year in the making and it's easy to understand why. Every page is packed with beautifully detailed illustrations - there's a big double page fold out spread and even a treasure map. This book will be great to share with a class...

Return to REVIEWS HOMEPAGE
Posted by Damian Harvey at 08:27 Permalink

I am already singing the "When I was One" pirate Song to go with it!