Girl Out Of Water by Nat Luurtsema, Reviewed by Kelly McCaughrain 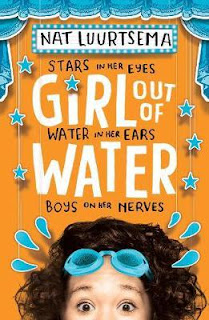 This is a light-hearted comedy and a fun read. The author is also a professional comedian and that really comes across in the writing, which is packed full of jokes.

Lou Brown is a likeable, hare-brained narrator who has just failed to qualify for a fancy swimming school for Olympic hopefuls. Her best friend did qualify and has left Lou behind. With her life’s ambition thwarted, she’s devastated, friendless and at a loose end, until presented with a very bizarre request from some popular boys in her school to coach them for a talent show.

I liked the unusual family set up in this book (the parents are divorced but live together because the dad is unemployed) and the minor characters were entertaining, and I enjoyed the relationship Lou had with her older sister. Lou’s voice is very contemporary, it felt like reading the Twitter feeds of teenage girls, but in a good way, and there were lots of contemporary references to things like Britain’s Got Talent etc.

There are some serious issues in the book, including pushy parents, dealing with stress and eating disorders, but they happen mostly offstage and are presented with humour so it never gets heavy. I particularly liked that it showed what happens when your dreams don’t come true, how failure isn’t the end, and how new dreams can come along.

I think younger teens would really enjoy this, but the 16 year olds in my teen writing group also found it a fun read.

Return to REVIEWS HOMEPAGE
Posted by Kelly McCaughrain at 08:00 Permalink

Lovely to hear of a funny book for teens that tackles big issues from that sort of approach. How refreshing!