A House That Once Was by Julie Fogliano, illustrated by Lane Smith and reviewed by Sarah Hammond 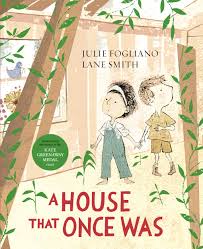 I stumbled on this little gem a few weeks ago. I read it, and read it again. And again. It is a lyrical picture book that somehow seeped into my bones. What is it about? It is a story of two children who stumble upon an abandoned house in the woods. Yet this summary of the subject doesn’t really do it justice. Here is the opening:

Deep in the woods
is a house
just a house
that once was
but now isn’t
a home.

Although there is no punctuation, there is no doubt as to the rhythm of this sentence. The story has a strong voice. We know exactly how to read it out loud. Also, there is a hint of fairy tale — deep in the woods — and a wistfulness in the tension between what is and what was.

The children get closer, noting evidence of the house’s past and its current state. The house is magnetic and ‘waiting’. Temptingly, the front door is “closed but not quite.” And the window is:

Slowly the children start to look for clues. Who lived here? They ask questions in hushed tones, growing bolder as they explore.

It is a story full of wonder and exploration. Empty houses can be sad places and at times there is a sense of loss, of the house waiting for someone to come home. But the author also balances this with humour in the children’s pondering:

‘… were they shipwrecked and now live on an island
wearing coconut clothes with a pineapple tie?’

The children even wonder if the house likes savoring its memories, hidden in the forest, intertwining with nature.

The illustrations by Lane Smith mirror the wistful nature of the story, teasing us with artifacts and possessions around the house of ‘someone who’s gone but is still everywhere’. The present day scenes are made with India ink, drawn on vellum, then pressed onto watercolor paper to create a blotted line effect. However, the illustrations showing the children’s flights of imagination and wonder — such as, ‘was it a man with a  big beard and glasses who would look out the window and dream of the sea?’ — are created using different techniques. They are brighter, more definite and also more whimsical. For these imagined scenes, Smith used oil paint on hot press board and scanned with paper collage elements that were combined digitally.

As with the artwork, this ostensibly simple story has many layers. It is an adventure. It teases and stimulates the imagination. It also muses on the passage of time, on memory, on change, yet gives a reassuringly comforting ending for its audience. It is also a picture book poem.


Return to REVIEWS HOMEPAGE
Posted by Sarah Hammond at 01:45 Permalink

Sounds wonderful. I love the title and the idea of a story about an empty house.Will definitely check this one out!