After the Fall by Dan Santat. Review by Anne Rooney 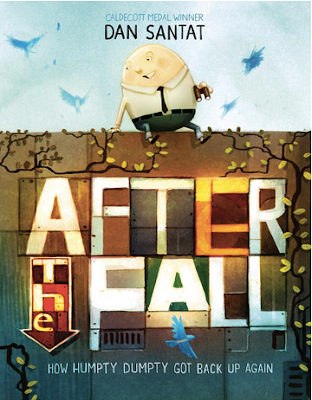 What was Humpty Dumpty even doing on the wall? Why would an egg climb a wall? Well, it turns out he had good reason to be up there. The outcome of the reckless adventure, in Dan Santat's sequel to the nursery rhyme, is not quite as tragic as originally reported. Fake news, you might say. But it was still pretty bad.

This time, Humpty tells his own story. The king's men could put him back together again after all. Hurray for state-funded medicine. Well, most of him... 'It turns out there were some parts that couldn't be healed with bandages and glue.' 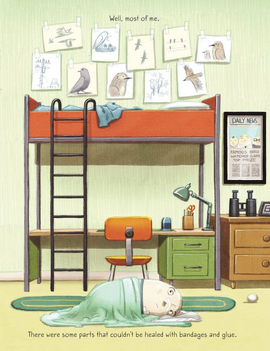 Humpty, it appears,  suffers from post-traumatic stress disorder. It has a serious impact on his life. He can't enjoy things that involve any kind of height-scaling. This is made pitifully clear in his restricted choice of breakfast cereals, one of my favourite pictures and packed with details to explore with small readers: 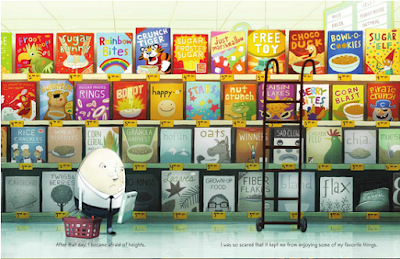 Really, who wouldn't rather eat Crunch Tiger than Bland? Something has to change.

After the Fall is a brilliantly imaginative account of the life-limiting nature of PTSD and anxiety disorders, or — for those with no experience of such things — of how to conquer restricting fears or phobias. It's a picture book and story first and the 'issue' is seamlessly integrated. Not even integrated, which sounds as though it's been added later. It's the driving force of the book. Eventually, the passion that took him up the wall in the first place leads him to work around some of the limitations the fall has brought to his life and another accident propels him to face and overcome his fear.

The text is succinct and Humpty's voice is marked by grammatical simplicity. It's a style well suited to an egg, with no sticky-out bits or trailing bits, all nicely rounded off. The illustrations are a delight and carry as much meaning as the words. They are cleverly constructed with brilliant use of perspective. When Humpty looks at the wall towering above him, he is small and grey, the wall looming and dark, and he is separated from it by the bleak blankness of most of the double-page spread. It says far more about fear and hopelessness than words ever could. 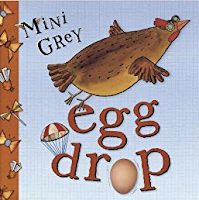 Another story about an egg...
If this is all too cheery and feel-good for you, and you want a more tragic egg story, I recommend Minnie Gray's Egg Drop. My children voted it the most devastatingly upsetting picture book of their childhood. 'The egg was young...' still elicits cries of 'Stop!'


Return to REVIEWS HOMEPAGE
Posted by Stroppy Author at 05:00 Permalink

Great choices - and goof to have some nf here!