Iguana Boy... saves the world with a triple cheese pizza! Oh yes, he absolutely does!

This is the brilliantly funny series from James Bishop and Rikin Parekh, perfectly suited to readers aged 7+. 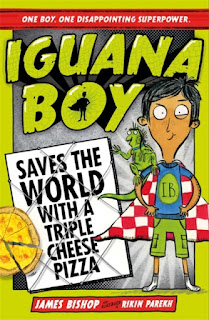 Poor Dylan has been waiting absolutely ages for his superpower to emerge. It's been made ten times worse by having an older brother and sister who both have great powers. They tease Dylan mercilessly for lacking a power.

But then Dylan's superpower does emerge. And it's not what he expected. Not even close. In fact, it's pretty useless. And he is VERY embarrassed.

After some hilarious scenes in a pet shop, featuring one of my favourite black and white illustrations from Rikin Parekh [below], things start to get serious. 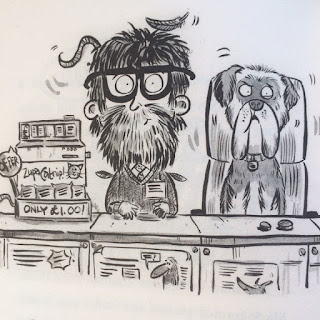 There's a super-villain on the loose.

Celina Shufflebottom's dastardly plot to round up all the superheros has worked. They are powerless to stop her, and unable to escape her clutches. Including Dylan's own brother and sister.

What Celine, and the other superheros haven't counted on... is Iguana Boy and his pizzas!

This is fast paced story telling, with a wonderful abundance of comedy. With plenty of cunning twists, James Bishop's storytelling is great stuff. Rikin Parekh's black and white illustrations feature throughout - they are brilliantly funny bringing out the characters and the situations they find themselves in. I particularly enjoyed the comic strip style scenes which pop up from time to time.

And the best news? There's a second book in this series out now... Iguana Boy vs. The 30 Second Thief. Plus, book 3 will be appearing soon. 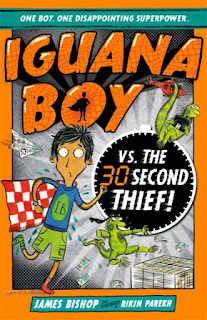 Return to REVIEWS HOMEPAGE
Posted by Emma Perry at 06:30 Permalink

Working on book III as I type! The children at the school where I work love Iguana Boy and the fun it brings to reading!

Thanks Penny, it's lots of fun!