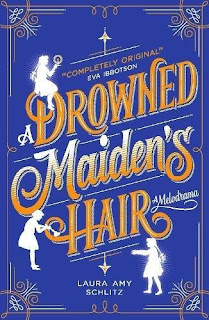 On the surface this novel is a classic gothic melodrama about an orphan child, Maud, who is adopted by the three elderly Hawthorne  sisters and promised a life filled with  happiness, pretty dresses and endless books but instead finds herself becoming a ‘secret child’ forced to take part in fake séances for the rich and heartbroken.
Maud is so beguiled by Hyacinth and the attention and ‘love’ which she gives to her that she is prepared to go along with their plans. After all she has never been the good or the pretty girl. There is a moving scene when her older brother comes to see her and we discover that she was left behind at the orphanage whilst he and her pretty younger sister were adopted by the same family,
‘Hyacinth Hawthorne- she’s the one who chose me – she wanted me. ‘She threw the word at him as if it could knock him flat.
They move to Cape Calypso to reel in the wealthy Mrs Lambert who has lost her daughter Caroline who drowned. It is a stifling existence being hidden away in the cottage with only Muffet, the deaf and mute servant for company. Their friendship develops as Maud begins to teach Muffet how to read and in doing so discovers her deep intelligence. Maud also realises how callously Hyacinth treats Muffet.
Maud takes nightly walks on the beach and rides on the carousel run by the fearsome Rory Hugelick. She meets Mrs Lambert and comes to know and like her. She begins to understand the guilt and pain that she feels, and feels a prickle of conscience as she starts to dream about Caroline.
The event of the séance and its aftermath are truly shocking as Maud discovers who values her life and who does not care if she lives or dies.
The novel is beautifully written in a fast-paced clear prose that has warmth, humour and an unlaboured lyrical quality. The characters are all three dimensional and have a moral ambiguity. There are reasons why people behave the way they do. There are characters who are kind and decent such as Rory and Mrs Lambert but you have to look beyond the surface. As my mother would say ‘handsome is as handsome does.’
This is a great read with psychological depth and one of the best depictions of grooming of a vulnerable child that I have read.

Sometimes I feel like I have information overload. Thank you for sending me only the materials that I want . I am grateful not to have to spend time sorting through stuff that isn't needed. Instagram Story Downloader

I really loved reading your blog. I also found, your posts very interesting. In fact after reading,
Its really Great HelpFull Thanks
Linkdin

Thank you for providing this information. I am learning so much about this Information. We can discuss it in more detail the next time about this. Instagram Photo Downloader

I also found, your posts very interesting. In fact after reading, Its really Great HelpFull Thanks
Linkdin

You need to take part in a contest for one of the greatest websites on the internet. I most certainly will recommend this website! check now

Thanks for the informations! I am grateful not to have to spend time sorting through stuff that isn't needed. Instagram Photo Downloader

Hello there! I just want to offer you a big thumbs up for your great info you have right here on this post. I'll be coming back to your web site for more soon. Thanks for the detail. military diet grocery list for more information about me.

Have you been thinking about the power sources and the tiles whom use blocks I wanted to thank you for this great read!! military diet meal plan I definitely enjoyed every little bit of it and I have you bookmarked to check out the new stuff you post

Great idea! My daughter will love this! We could even do different sized ones with different between military diet shopping list the coloured leaves and create a fairy forrest. Thanks.

Great idea! My daughter will love this! We could even do different sized ones with different between the military diet shopping list coloured leaves and create a fairy forrest. Thanks.

I want to thank you for sending this information . Hearing your perspective helped me decide to enroll. Instagram Story Downloader

Hello there! I just want to offer you a big thumbs up for your great info you have right here on this post. I'll be coming back to your web site for more soon. Thanks for the detail. substitutes for the military diet for more information about me.

I am excited to read the information you give, about how to get out of debt! You are a great mentor and I appreciate your book suggestions. Yourdiscoverlab Travel

I want to thank you for sending this information. Trade Like Chuck Review

There are others that have allergies or simply can’t choke down peanut butter. The recommendation is to follow the diet to as close as you possible can. But if you must, below is a list of all the foods you can use for 3 daysubstitutes for the military diet. Some of the foods can be swapped in order to make it vegetarian, lactose free, or gluten free.

Give your furry friend the gift of comfort with this super soft Vingtage Motorcycle Helmet "Issuu" for dogs and cats.
Our beds feature a round design, creating a cozy and protective atmosphere.
Pets will feel surrounded by love and warmth, allowing them to experience truly restful sleep.
The bolstered edge also acts as a headrest, offering additional orthopedic support.

I want to thank you for sending this information.....

Really great information. I always love to read and spread this kind of information that is unique and really informative. Keep up the good work.

Really great information. I always love to read and spread this kind of information that is unique and really informative. Keep up the good work.

I don’t ordinarily comment but I gotta state thank you for the post on this perfect one.
Here is also a good info.
How to freeze soup

Nice Article. Your blog helps me to improve myself many ways. Thank you for sharing this kind of wonderful information.