Song for a Dark Queen by Rosemary Sutcliff. Reviewed by Ann Turnbull. 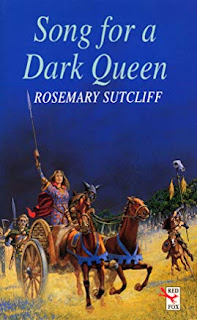 "So we would ride through the neck of the forest, and down to the black skin boats waiting among the reeds. The Queen wrapped in an old wolfskin cloak against the chill of the water-mists, and no sound as we journeyed but the salty lap and suckle of the water among the sedges, and somewhere a bittern booming in the night..."

Rosemary Sutcliff was one of the most popular and admired authors of historical fiction for children in the 1950s and 60s. Surprisingly, I never came across her books as a child, and have since read only a few. Song for a Dark Queen (1978) is one of her later novels and benefits from the re-kindling of interest in Boudicca and in women's history generally. It tells the familiar story of the queen of the Iceni tribe in what we now call Norfolk, and the revolt she led against Roman rule. Rosemary Sutcliff envisages the Iceni as having a matriarchal royal line, so it is Boudicca, the queen, rather than Prasutagus, her husband, who is the ruler of her people.

The story is narrated mainly in the voice of Cadman, Boudicca's harper, a man who had known and attended upon her since she was a child, but who himself seems ageless and without personality. He is there simply to record her life and deeds, so that he can make a song of it for future generations.

The style is epic, well-suited to the story of a great queen. But in the latter part of the book a different voice appears from time to time: that of a young tribune whose chatty letters to his mother in Gaul are a welcome contrast. These not only give information about the Romans' tactics, but provide a down-to-earth voice to balance the heroic narrative of Cadman.

The Iceni were horse-breeders and farmers, and there is beautiful, detailed description throughout of the countryside, seasons and animals. The story has excellent pace and tension. It recreates the lives of the British tribes and their religion and makes sense of some of their seemingly barbaric practices. All this detail is woven into the story so that it illuminates rather than weighs down the feelings and actions of the characters.

This book should appeal to readers of 10+ who respond to its style and descriptive power.


Return to REVIEWS HOMEPAGE
Posted by Ann Turnbull at 15:06 Permalink