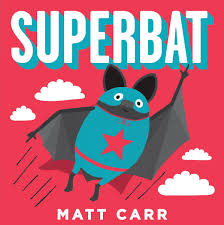 Who doesn’t love a good superhero? Who doesn’t love an engaging animal protagonist? I have read this picture book to youngsters in several of my writing workshops and it goes down a treat. Even the title strikes a chord with these audiences.

In this story, we follow the journey of Pat the bat who cannot sleep because he yearns to be a superhero. Yet even though he makes himself a costume (struggling to keep his wings out the way of his sewing machine), the other bats need more convincing. What are his superpowers exactly?

Pat has super-hearing! But so do the other bats. Pat can fly! But so can the others. Pat has echolocation! But so do all his bat friends (and, inadvertently, the reader learns what echolocation means). Carr weaves in animal facts and learnings as this issue is debated. For interested readers, there is a section of Batty Facts in the back matter of the book, too.

Dejected, our hero returns home. Perhaps he is no superhero after all.

Carr injects humour, both for adults and children, throughout the book. The opening sentences are simple but funny (and informative about animal behaviour): It was the middle of the day and Pat the bat could not sleep. He was bored of hanging around in a dark cave.

There are also jokes in Carr’s comic-book style illustrations. Readers enjoy spotting them, such as the slogan picture on the wall that reads Cave Sweet Cave.

The adult reader also has cause to smile as we hear the commentary of the residents of the city looking up at Pat flying across the skies. Is it a bird?  Is it a plane? Er… I think it’s a BAT in a funny little costume!

However, all is not lost. Suddenly Pat detects a faint cry from the other side of town. Someone is in danger! And now we see a real superhero, rushing to the rescue in a ‘blur of fur’. Pat’s superpower is ultimately, we discover, his courage. The young audiences in my workshops found this ending very satisfying and relatable. As one girl told me afterwards, ‘courage means you do the right thing, even though it’s hard.’


Return to REVIEWS HOMEPAGE
Posted by Sarah Hammond at 02:04 Permalink

I love the sound of this! Just need someone to buy it for...