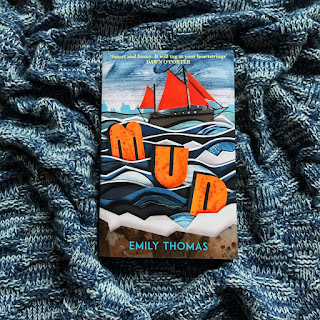 I loved this debut novel for teens by Emily Thomas. I think you rarely see such complex issues dealt with in children’s books in such a believable way and with such wisdom.

Lydia’s mother is dead and her unreliable father has just lost their house and is moving their family of five plus his new girlfriend plus her three kids plus the cat to live on a houseboat called the Lady Beatrice. (This is my idea of hell btw. Not the boat, the sharing it with eight other people).

Amazing as that plot sounds, the more extraordinary thing is that it’s based on Emily Thomas’s own childhood when she did indeed live on a barge with a very large stepfamily. The book begins in 1979 and if you remember the 80s there’s a lot of throwback fun to be had.

I don’t know how much of the story is strictly autobiographical, but I’d believe you if you told me it all really happened because it felt like Thomas knows what she’s talking about. The book deals with big emotional stuff – living with an alcoholic, the powerlessness of childhood, loss of a parent – that would be hard to write about if you hadn’t experienced it, but I completely believed in the characters.

I became hooked as things just got progressively worse and worse for the family, and right up until the end I was wondering how on earth they were going to turn things around. Or if they would turn it around. Usually with children’s books you can pretty much expect a happy ending but this felt so real I wasn’t sure how it was going to go, and the ending did feel true to that sense of life being more complicated than fiction.

We’re told when we write we have to have a character who wants something and they have to go out there and actively make it happen (with carefully placed dramatic moments along the way) and all that’s great, but it’s not real life at all. In real life children are often completely lost and powerless, washed about with the parental tides and it takes all their effort just to stay emotionally afloat, never mind make things happen. And yet for all her powerlessness, Lydia isn’t a weak character. She comes to realise she’s emotionally much stronger and more resilient than she knew, and that maybe the bravest thing she can do is realise that she can’t fix her family, they have to do it themselves.

Despite all this disaster, the book is also warm and funny and a thoroughly enjoyable read. I highly recommend it!

She blogs about Writing, Gardening and VW Campervanning at weewideworld.blogspot.co.uk

This sounds brilliant! I will add it to my TBR pile immediately. Thanks Kelly!

Thanks for this, Kelly. Sounds great - and who can resist an interestingly-complicated family that's not their own? Especially with a house-boat setting?