THE MAGIC HOUR by Ian Beck. Reviewed by Adèle Geras

A couple of years ago, I contributed a version of the Pied Piper story to the OUP series called Greatest Stories, part of their Tree Tops Reading Scheme. My editor, Maxine Howells, asked me by email who I would choose to illustrate it. I answered without hesitation: "Ian Beck, but he'll probably be far too busy. He's in demand."
Reader, he agreed. And I was thrilled to bits and my Pied Piper is gorgeous. Before that, Ian illustrated a version I wrote for David Fickling Books of The Six Swan Brothers.  So, as so often with my reviews, I know the person whose work I'm commending to you and admire him enormously. I am, however,  not in the least embarrassed  to be highlighting another book by him.  This one, whose cover is below, I was particularly interested in, because it's a sort of wonderful artistic footnote to one of my favourite paintings. Which also, I read, turns out to be a picture which obsessed the young Ian when he was, in his words, "a callow art student." 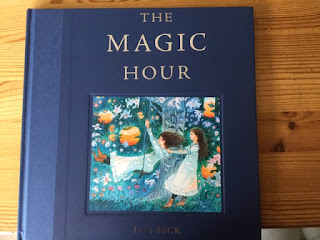 Below is  the picture Ian and I both love: it's by John Singer Sargent and it's called Carnation, Lily, Lily, Rose and it lives in Tate Britain. If you can get to see it, you should. You won't be disappointed. Ian tells us in his book that the Magic Hour of his title is  dusk, when the light is just right. 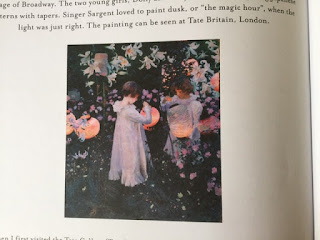 The story is  a simple one of two sisters, Lily and Rose. Rose is younger and does everything slightly behind  her sister, following her everywhere. A sort of refrain is set up: First Lily, then Rose... 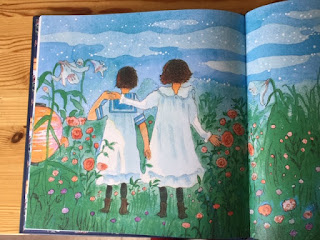 But it's the younger Rose who sees the light in the next door garden, at dusk.  She thinks that fairies might be in the garden. The girls go exploring and find their neighbours,  John Singer Sargent and his wife, though they're only referred to as The Man and the Woman.  And of course they don't find fairies but they do hear a nightingale singing and the lanterns that they mistook for fairy lights. 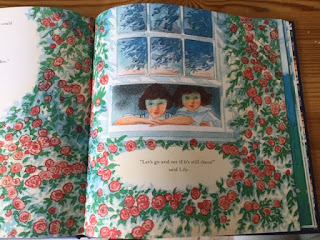 The story is less important here than the glorious illustrations, spilling over double pages for the most part, as in the picture below, where Lily and Rose are depicted with long hair.  This is cut later on, but I am sure that the decision to show long hair in the first few spreads and on the cover is because Ian Beck wanted to paint the flowing tresses. He may correct me if I've got this wrong. 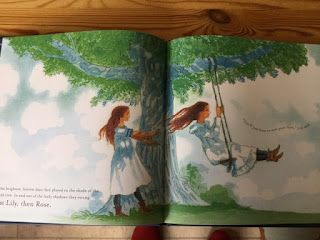 Every spread is suffused with colour and the blues and greens sing off the page. You could spend hours looking at the wild flowers, at the sky, at how the words are arranged on the page and trying to work out  how painting the dusk works. You do exactly this in front of Sargent's original painting. How did he make those lanterns glow like that? It's miraculous! The book has been very well produced by Tate Publishing, who know how to make books that come out under their name as perfect as possible. The typography, the quality of the paper, the colour reproduction: they're all beautiful. And I am always thrilled to bits when a book has endpapers. Here they are below and they're splendid. I'm glad the fashion for them has spread to much modern hard-backed fiction.  Do try and see this book in real life. It's wonderful in every way. And best of all, it will lead you to look again at the work of John Singer Sargent. 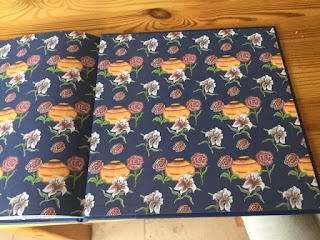 PS. I checked with Ian before putting this up, and yes, he did have the long hair at first because he wanted to paint it.
PPS. The book was designed by Ian's son, Laurence Beck, who was too modest to have his name appear. Well, I reckon designers are the unsung heroes of the book world and I try to credit them wherever I can. Laurence Beck....huge applause to you!

This looks such a lovely book! (Re Lily and Rose: the Robin Hood book by Carola Oman that I was given in 1954 contains a story about two sisters called Rose the Red and White Lily - Rose being dark-haired and rosy and Lily fair and pale..)

That is a beautiful book - and one of my favourite paintings. Thanks, Adele!

One of my favourite paintings, too.