The Book of Mistakes, by Corinna Luyken, reviewed by Sarah Hammond 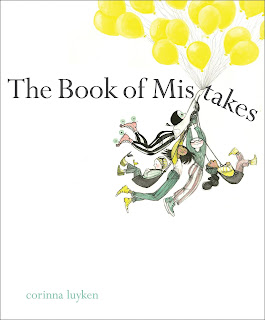 Some time ago, during one of my Story Explorer Creative Writing workshops for youngsters, a little girl became very frustrated that she could not get her drawing ‘right’, that she kept making 'mistakes’. In fact, she almost ripped through the page with her pencil as she scratched out her illustrations. We worked through the problem, but shortly afterwards I stumbled upon The Book of Mistakes by Corinna Luyken which is the perfect picture book to help in this situation. What an excellent resource to show children that a 'mistake' can actually be the beginning of a whole new set of possibilities.

The premise of the story is simple: the narrator makes a mistake when drawing a character's face. One eye is bigger than the other. So the narrator tries to fix the problem… and makes it worse. Now the other eye is even bigger than the first eye. BUT, if the too-big-eyes are turned into a pair of glasses, then the character looks even more interesting than in the original drawing.

The narrator makes more mistakes: the neck is too long, the feet do not touch the ground, a splodge of ink messes up the face. However, with a bit of imagination and creativity, each error develops the story and moves it forward: now the neck is decorated with a beautiful collar, the character is actually wearing roller skates, and the ink blot becomes her hat.

Some mistakes just do not work out and are disregarded. But in the grand scheme of the other inventions in the book, this does not really matter.  The reader sees that the unfolding story is a work in progress, that it is fun to experiment, to turn one thing into another and see where it takes us.

After a while, the words in The Book of Mistakes disappear completely. For five straight double-page spreads, the illustrations alone tell the story. Our newly-created girl character moves into a story world, which develops into an adventurous fantasy land of possibility, peopled with children playing around a big tree.

The perspective for the illustrations now changes, zooms out, so that the tree becomes part of a bigger wood. Then we realize the dark wood is actually on top of a girl’s head (part of her mind?) — a girl that has an uncanny resemblance to the character that was created at the beginning of the book. And now this girl starts to draw a face which reminds us of how the story began…

We are left with two final questions that address the reader directly: “Do you see how with each mistake she is becoming? Do you see now who she could be?”

As observed by a child at story time, “Since the girl in the book is the one making the pictures of herself, it’s like she’s the real artist. We’re seeing how the real artist thinks.”


Return to REVIEWS HOMEPAGE
Posted by Sarah Hammond at 00:30 Permalink

What a great and worthwhile concept for a picture book. Thanks, Sarah. Your Story Explorer workshops must be great fun!

Kiss me hard & fuck me harder! Hey, i am looking for an online sexual partner ;) Click on my boobs if you are interested (. )( .)