Who was Leonardo da Vinci? by Roberta Edwards, illustrated by True Kelley, reviewed by Lynda Waterhouse. 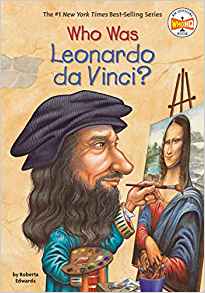 A copy of this book literally fell into my hands whilst I was running a creative writing session at The Queen’s Gallery.  I had never heard of this hugely popular American series before; I usually get my fun facts via the fabulous Horrible Histories. I have not succumbed to Netflix so was also unaware of the Headquarters of History website and programmes, http://www.whowasbookseries.com/the-who-was-show-on-netflix/, so stumbling across this book was a discovery of a whole new series.
The book was published in 2005 but in this 500th anniversary year of his death it felt like timely to read it. It is designed for middle grade readers which is around 8-12 years.  The book is divided into eight chapters and there are over eighty black and white illustrations drawn by True Kelley dotted throughout the book. It must have felt a wee bit daunting to recreate some of Leonardo’s drawings but Kelley has captured the energy and spirit of this phenomenal artist and scientist.
Leonardo was a complicated character and his life and works are still argued about and debated by scholars and art historians. It can be overwhelming trying to get a handle on the breadth and scale of his work and Roberta Edwards approaches the challenge with clarity and a light touch. In the introduction she says,
‘By his own standards, Leonardo was a disappointment. He never reached the goals he set for himself. His greatest works were left unfinished. Nevertheless, what he did achieve in sixty-seven years still sets the standard for human excellence. It is hard to imagine someone doing better.’
As well as eight chapters the book contains a bibliography and dotted around the book are further information about such things as parchment and paper, the renaissance, and cartoons of the 1500s. I particularly liked the timeline of Leornardo’s life in contrast with a timeline of what events were also happening at the same time such as developments in science and exploration.
Notably, chapter one, entitled An Unwanted Boy, is a simple and beautifully written account of his birth and difficult childhood: ‘No-one loved the little boy. The only person who showed interest in him was an uncle named Francesco.’  Roberta has a way of dealing head on with difficulties and disappointments but also adding an upbeat and poetic ending to each chapter. It would make an interesting non-fiction bedtime read.
The final two paragraphs of the book says, ‘And so Leonardo finished out his life in France. On May 2, 1519, he died. One story says that he died in the king’s arms. Another says that his last words were about his horse statue. If only he had been able to complete it. He was buried in a chapel in Amboise. It may not be a happy ending. But it isn’t a sad one either.’
This is a gem of a book.
Who was Leonardo da Vinci published by Penguin Workshop, www.whohq.com
ISBN 978 0 44844301

Your face would look better between my legs. Hey, i am looking for an online sex partner ;) Click on my boobs if you are interested (. )( .)