The Time of Green Magic, by Hilary Mackay: reviewed by Sue Purkiss

This is an enchanting book. We get the flavour of it right away, with a girl called Abi engrossed in a book about the Kon-Tiki expedition (when Thor Heyerdahl decided to see if it was possible to cross the Atlantic on a raft). Hilary Mackay sketches in Abi's background in just a few sentences, telling us that 'Reading was Abi's escape...' that she read while her father, Theo, met and married Polly, who brought with her two new stepbrothers, and her beloved Granny Grace went back home to Jamaica. And here she is now, so absorbed in this tale of the sea that - wait a minute! How come she can taste salt on her fingers? And how come a green parrot had been in the room - quite certainly, as even Louis, her younest stepbrother, has caught a glimpse of it? 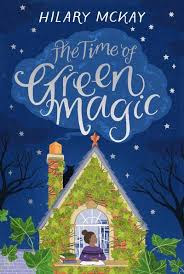 It's all something to do with the house which the newly blended family is renting. The house is covered - absolutely covered - with green ivy, and the magic seems to emanate from this. At first it seems to be just Abi who's aware of it, when the books she reads come alive - but then Louis encounters a creature which at first he things is a 'nowl', but which turns out to be something much more dangerous, from which Louis somehow has to be saved.

So it is a book about magic, which happens very naturally and convincingly. (There's no explanation as to where the magic comes from, but somehow that doesn't seem to matter.) But it's also about the usual things that matter very much - relationships, growing up, loss. Abi resents the new additions to her family, and she misses Granny Grace very much. But this is not a story where people are horrible; in fact, they're all pretty delightful. Theo, a nurse in an emergency department, is kind and funny and a good cook. Polly, who works for a charity and has to go abroad for work, is also lovely. Louis is sweet and funny. Max has a hard time when he falls out with his best friend, Danny, and then falls for the French art student who picks Louis up from school. When the crisis comes, thay all play their part, and they're much more of a family at the end of it.

It's just lovely. A perfect book to curl up with and escape the increasingly bonkers world outside, whether you're a child or a grandma: gentle - and none the worse for that: funny, enchanting, and beautifully written.

(For more writing about books from Sue Purkiss, see her blog, A Fool on a Hill.)

Return to REVIEWS HOMEPAGE
Posted by Sue Purkiss at 07:00 Permalink