First things first. I do know James Mayhew but I only know him after getting in touch with him on Twitter because I was such a fan of his. It was one of his recent books, Mrs Noah's Pockets, written by Jackie Morris, which spurred me to write to him but I've always admired his work enormously. It's very varied, which I regard as a treat....every new book shows a different facet of his talent.   This particular volume, cleverly reissued by the wonderful Welsh publisher Graffeg Books to take advantage of his recent successes (Gaspard the Fox, etc) was first published in 1993 and it's fascinating to me to see all of the things I love already there, in the relatively distant past. 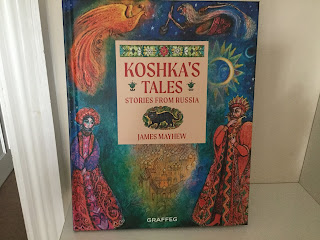 These things can be boiled down to energy, colour and a taste for the theatrical. Those of you who know James as someone who bombs about the country and abroad painting while an orchestra plays....illustrating the dramas going on in a performance of music or opera...will see the energy of those performances (which I've never seen but which I read about all the time) right there on every page. It the energy that shines out in the boldness, the verve, the lack of reticence that says: Look at this beautiful thing! Look again!  It's the kind of work that welcomes readers (because in this book, James has written the words too!) as well as spectators. The combination is a real joy.

I must apologise for the quality of the photographs, which I took myself. They do not do justice to the singing colours of this book and I do urge everyone to get to a bookshop at once and have a look at the real thing. It's a feast. I love the 'too much of a good thing can be wonderful' * attitude of every illustration.  The most fiery orange, the richest red, the whitest white (often tinged with blue) and greens like the lit-up hearts of forests.....they give a physical form to the stories which, being Russian, are full of wonders and over -the- top characters like Baba Yaga, with her chicken legs and appetite for human child flesh.  There are several full-page spreads as below, and the last photograph shows how the other pages are laid out, with beautifully designed borders. 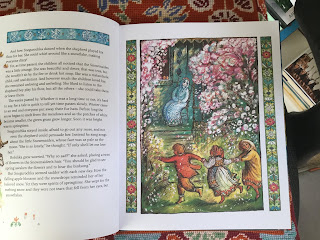 The stories are told by Koshka, a black female cat. This appealed to me because I once wrote two novels** for younger readers narrated by a cat called Ozymandias (Ozzy for short) who remains one of my favourite characters from  among my own books. 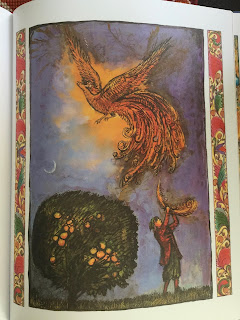 The illustration above comes from perhaps the most well-known of all Russian tales, Ivan, the Grey Wolf and The Firebird.  There's every sort of character in these pages: beautiful princesses, wicked rulers, talking animals, scary creatures and benevolent ones. There's passion, danger, violence and revenge. I picked out this very short  passage which gives a taste of what I mean.

"Ivan saddled up his horse and set off. In time he reached a crossroads where a notice read: 'Go back and fail,  go forward and starve, go left and be eaten by wolves, go right and your horse will be eaten."

A delightful prospect, I'm sure you'll agree. Fortunately Ivan is helped by the magic of the Firebird's feather...

We have fables about the end of winter and the arrival of spring (very important in Northern lands) and about virtue triumphing as it must and pride being punished. We're on both  land and sea, and the stories reflect the Russian landscape and its enormous land mass.  The dark greens and shadows of Russia's forests are  everywhere.

There's also a very useful explanatory note at the end of the book, where Mayhew explains that these tales are often retold and that they shape-shift with every new generation. Today's children are lucky to have this version of the stories. And James Mayhew is lucky to have Graffeg realising that we need them as much as we did in 1993. 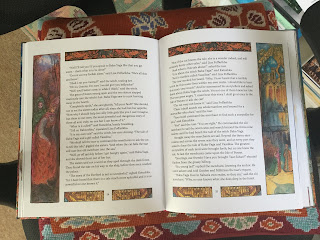 
Return to REVIEWS HOMEPAGE
Posted by adele at 01:30 Permalink

I don’t know the question, but sex is definitely the answer. Click here and Check me out i am getting naked here ;)