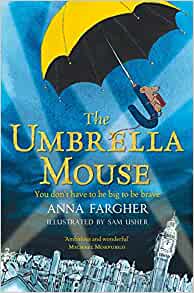 I have often gazed in delight and wonder into the window of the fabulous James Smith & Sons Umbrella shop in London. I even own a painting of it, so imagine my delight to discover a story that begins inside the shop and is about Pip the mouse who lives there with her family snuggled up inside the beautiful Hanway umbrella.  Pip lives there with her parents unseen by the owners but Pip has met Peter their son and he will keep silent about their presence. One day Pip hopes to travel to Gignese in Italy, her mother’s home, and where the only umbrella museum in the world is to be found.
The story is set in 1944 during the Second World War and London is facing the Blitz. The shop is bombed and poor Pip is orphaned and made homeless in one cruel fell swoop. She is saved by the wonderful search and rescue terrier dog, Dickin. Pip’s first thought is to make her way to Gignese but she finds herself involved with Noah’s Ark , a secret gang of animal resistance fighters: ‘since the first wars were fought among men , animals have been secretly helping war efforts in ways humans would never believe, even if they saw it with their own eyes.’
What a wonderful premise this is because it allows the reader to experience war in all its pain and hope, cruelty and humanity through the prism of a mouse’s perspective. The animals explain things so well.  Hans the German rat speaks about how he realised his mistake in supporting the Nazis: ‘One night when I was taking potato peelings I had stolen from the camp kitchen to give to inmates … I found Herr General and two more Goliath Rats attacking a woman too weak to move from where she lay. A deadly fury stirred in my heart and a bitter fight broke out.’
Pip travels to France where she works alongside the animals fighting with the resistance and learns whom to trust and whom to fear. She meets old friends and makes new ones. The story is full of facts and information about the Second World War which will make it a useful addition to a classroom library. Anna Fargher writes so vividly that at no time do you feel that you are being ‘given facts.’ Sam Usher’s pen and ink illustrations add energy and pace to the story whenever they appear on the page.
A heartfelt story of courage, friendship and hope, I cannot wait to read the next instalment.

This sounds a delightful tale for a young, animal-loving reader, where a small animal's adventure are woven through the history of WWII.

Maybe one for a child who enjoys books by Michael Morpurgo?

Love is an ice cream sundae, with all the marvelous coverings. Sex is the cherry on top. Hey, i am looking for an online sex partner ;) Click on my boobs if you are interested (. )( .)