The Wall, by John Lanchester - reviewed by Anne Rooney 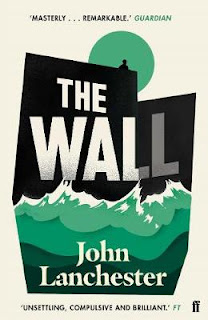 This is not a cheery book. Oh no. Not by a long way. I read this book on the bus to and from the hospital, day after day, visiting my dying mother. On reflection, that seems about right. But even if you don't have a dying person — and if you can tolerate any more despair in your life right now — it's an interesting take on the direction the UK is heading now, with its hostile environment to immigrants and refugees. And it will speak to any nation where someone or other in power thinks building a wall to keep out Others of any kind is a good plan. The transition to Other is easily made. Those most proud of their right to be Inside can so very soon be Outside. You can read it as an allegory of isolationist post-Brexit Britain, or Trump's USA, or a warning against the consequences of climate change. It's not sufficiently closely tied to any of these to be a strict allegory. But allegory's definitely waving her arms around, mouthing 'look over here'.

Set at an unspecified date in the future, the whole of Britain is surrounded by a coastal wall, 10,000 km long. This is policed, day and night, by national service conscripts who have to shoot on sight any approaching boats. You might not think Britain a good place to be, but there are always worse places, and one of those is the open sea. Another is Britain in the future. Immigrants who manage to get past the Wall can either by set back in the sea or become Help (basically domestic slaves). Anyone policing the wall who lets an Other in — no matter how heroically they tried to prevent it — is put to sea in a boat. A few people, called Breeders, have children and are let off Wall-duty, but most people refuse to bring any offspring into this terrible world.

The tale follows the fortunes (or misfortunes) of Kavanagh, a new arrival, as he begins his two-year stint working on the Wall. The overriding experiences on the Wall are of cold and boredom. The fear that Others will come and they will have to fight them is real, but preoccupies him less often than the rigours of an entirely comfortless life. Very slowly, he forms bonds with other people working on the Wall. Eventually, he does have to fight. And that's when things change. The second half of the book is very little like the first and more of an adventure story. It's not a particularly happy adventure, and Kavanagh often rather wishes he were back on the Wall.

It's a strange book because it is so clearly in two halves. But so often our lives are turned around by a single event. What happens to Kavanagh when the Others attack the Wall changes the course of his life entirely, through no fault of his own. The quiet monotony of his life in the first half conveniently gives him time to ponder the state of the world. This is maybe a lazy bit of world-building, but it's so natural to reflect on what he's left behind and why he's on the Wall that it doesn't look clumsy as you read it.

One of the more disturbing aspects of the book is that people, Kavanagh included, accept the way things are. There is no hint of rebellion against Wall duties. Normal middle-class people are happy to take a Help-slave. Perhaps that's no surprise. Another thing that is consistent, then and now, is the fury of youth with what the older generation has made the world. But it's rather impotent fury. As Kavanagh says at one point to an older man who hopes to advise him, 'Why don’t you travel back in time and unfuckup the world and then travel back here and maybe we can talk.’ Perhaps we can have some potent fury some time soon that will help us step back from this fate.


Return to REVIEWS HOMEPAGE
Posted by Stroppy Author at 08:09 Permalink

No woman gets an orgasm from shining the kitchen floor. Hey, i am looking for an online sexual partner ;) Click on my boobs if you are interested (. )( .)