Charles Keeping: Londoner and Illustrator – text by Geoffrey Beare, images courtesy of the estate of the late Charles Keeping - review by Lynda Waterhouse 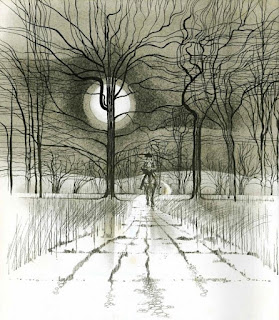 For once I was organised and made my first visit to the Heath Robinson Museum in Pinner on 29th February to see the Charles Keeping: Londoner and Illustrator exhibition. I am a huge admirer of Charles Keeping’s work and was surprised to learn that this was the first solo exhibition particularly when you consider he illustrated over a hundred books and won both the Carnegie and Kate Greenaway medals.
In hindsight it was a good move as in the light of Covid-19 as the Heath Robinson museum is now closed. So I am reviewing the exhibition catalogue. It costs £4.95 and contains thirty of Keeping’s illustrations as well as an informative text by Geoffrey Beare so is the next best thing to seeing the exhibition. The money will also support the museum.
Charles Keeping (1924-1988) was born in Lambeth and his childhood home overlooked Vauxhall market and the Schweppes bottling yard which had cart horses.
‘When it comes to my own actual work, later in life, I tend to keep within what I could see as a child. That was mainly a small garden, a fence, and a large blank wall. Against that blank wall many things took place. It was a yard which had cart horses, and I could see the vast shapes of horses moving across this wall. These very simple images attracted me.’
After the deaths of his father and his grandfather in 1934 he was mainly brought up by his grannie, mother and aunts. He left school at thirteen and went to work for Clowes the printers. During the war he worked as a telegrapher on a frigate before, after several attempts, making it into Art College. His first children’s book illustrations were for the historical novels of Rosemary Sutcliffe and Henry Treece. His approach with double page spreads and fighting across pages was seen as radical at the time. 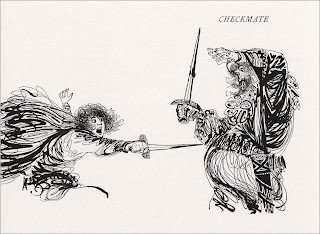 In a discussion in 1970 Keeping had said,


‘Many people believe that an illustration should illustrate the story. This is something I don’t really believe. I’m sick to death of the illustration that just shows an incident. It bores one doing it. I would sooner make a drawing that has an evocative mood…It’s like two jazz musicians playing together – one plays piano, the other alto sax, or one drums and another trumpet. You play as a combination.’
I thoroughly recommend a visit to this small museum and its permanent exhibition about Heath Robinson. How could you not love a place that describes itself thus?
‘The Heath Robinson Museum is for students of illustration, lovers of landscape paintings, advertising enthusiasts and academics, dads building contraptions in sheds, believers in fairies, children with time to dream, couples stuck in tiny flats, people who put holes in cheese, artificial teeth testers and anyone who’s ever held something together with a bit of string.’
You can see also Charles’ and his wife Renate’s work at the Keeping Gallery at Shortlands in Kent. Contact thekeepinggallery@icloud.com
Heath Robinson Museum, Pinner Memorial Park, West End Lane, Pinner HA5 1AE, www.heathrobinsonmuseum.org

Lynda, so much to take in here! I did not know of the Heath Robinson Museum at all, so thank you. Putting it on my Hopeful AC Visit List.

The Charles Keeping catalogue - and with Keeping quotes like those - sounds a real treasure for anyone interested in illustration. I love his work.

Renate was an artist working with fabric and thread too. I saw an exhibition of her work - and some of John's - on display at the Harrogate Knitting and Stitching Show, just before the Keeping Gallery opened. I particularly remember her stitched apples. Thanks.