The Worst Class In The World, written by Joanna Nadin, illustrated by Rikin Parekh, and reviewed by Casper Purkiss (aged 8).

A few weeks into lockdown, I sent this book to my grandson, Casper, who lives in Brussels. He told me that it was really good and very funny and he'd read it in a day, so I asked him if he'd like to review it for me. This is the result - we did the interview via WhatsApp. Then I sent my notes to Casper for him to check them, and he clarified a few points. 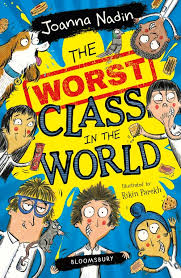 Me: So - can you tell me what the book's about?

Casper: It's about Class 4B - the worst class in the world - and they have this thing called 'Show and tell' where they show off about stuff. The head teacher, Miss Bottomley Blunt, whose hair is shaped like a bottom, is extremely mean and she has a humongous laminated list of rules.

The teacher, Mr Nidgett, who is very nice most of the time, has a pair of emergency shoes for in case anything gets spilled on his shoes. Miss Bottomley Blunt is horrible to him - it's a bit like in Matilda, where Miss Trunchbull is horrible to Miss Honey.

The class has a log in the playground that they call the Smelly Death Log, which is hollow and has bird poo on it - they think that if you touch the bird poo for more than one second, you will be swallowed by the ghost pigeon.

Me: Is there a character who's the hero?

Casper: There's no one hero, the whole class is important. They have lots of foolproof plans, but often, something goes wrong with them.

Me: Was there a particular bit you specially liked?

Casper: I liked the bit where they made biscuits from a recipe that wasn't very clear - that was really funny. They didn't have all the right ingredients, so for instance they used chutney instead of jam.

I also liked the bit where Lacey Braithwaite lies about some biscuits she got in a shop called Superior Biscuits. She says the jam inside them is made of 'strawberries picked by highly-trained monkeys', and that the butter in them is made of 'milk from the world's most expensive cows', and this is obviously a terrible lie.*

Me: What did you think of the illustrations?

Casper: They were really good. Look, these are the pictures of the characters - I'll send you them. 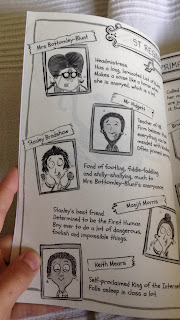 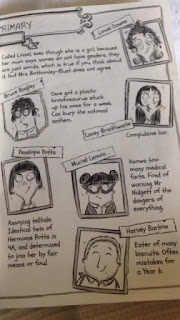 Me: What sort of ages would you recommend this book for?

Casper: I would recommend this book for boys and girls from 7-12 - you probably shouldn't read it to smaller children, because it might make them get up to mischief. There's a LOT of mischief in this book!

Me: Thank you very much!

* Casper has become a very expert baker during lockdown, so that may be why he particularly noticed the biscuits.


Return to REVIEWS HOMEPAGE
Posted by Sue Purkiss at 04:00 Permalink

Love this new style of interview! Thank you Caspar - and Sue.

THE WORST CLASS was/is available from my local library service, and I read it on my tablet. Maybe availble where others are too? Must say my tablet's easier than a kindle to see at night!

Tease me until I’m begging for it Click here and Check me out i am getting naked here ;)