The Faraway Truth by Janae Marks, review by Lynda Waterhouse 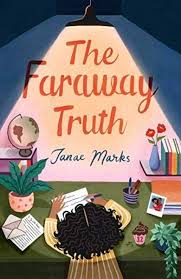 First things first; what a joy it was to walk into Foyles in the Royal Festival Hall, to browse and to select a book to review. [BTW Foyles also gives 15% discount to Society of Authors’ members.]
The Faraway Truth, originally published in the United States as From the Desk of Zoe Washington, is an amazing debut from Janae Marks. It hooked me from the first sentence,
The day I turned twelve, I was certain it’d be my favourite birthday yet, but then I got the letter.’
Zoe Washington is a Black girl who lives in Boston, USA, with her Mom, her white stepdad and her dog, Butternut. Her ex-best friend, Trevor, lives next door. Zoe’s passion is baking and her dream is to enter the Kid’s Bake Challenge on the Food Network. After having an amazing birthday party making cupcakes at Ari’s Cakes, she receives the letter.
The letter is from her father, Marcus Johnson, from Massachusetts State Penitentiary where he is serving a long sentence for murder. This is the first letter she has ever received. Zoe is confused, Marcus sounds so nice and is nothing like the bad person her Mom always made him out to be. Zoe, with the support of her Grandma, begins a secret correspondence with him.
This is a funny, exciting, heart-warming story that does not shy away from racism:
‘I had no idea where the idea of Black people as thieves came from, but it wasn’t the first time something like that had happened. In fourth grade, a girl told me that I wasn’t invited to her birthday party because her parents said Black people steal. I’d said her parents didn’t know what they were talking about. After I told my mom, she stopped herself from cursing out, and said she didn’t want me going to that racist family’s house anyway.’
And so begins Zoe’s journey to discover the faraway truths of life. Do innocent people really end up in prison particularly if they are Black? Her father, Marcus is a tall, strong, dark skinned man. Zoe only has one photograph of him. She learns that like her he is huge fan of Boston Celtics basketball team, that he loves Stevie Wonder and calls her Little Tomato. He also shares her interest in cooking. He tells her that he is innocent and that he has an alibi.
Zoe begins to do some research and discovers some hard truths about the justice system in America.  She and Trevor set out to find the truth and locate a possible alibi. Their breath-taking journey across Boston literally set my heart pounding.
The writing is sublime and the characters are so well drawn and human. Mom is stubborn and has hidden previous letters but she is also funny, smart and wise. Trevor has to learn the value of true friendship. There is a great playlist to accompany the story too. Although it is set in America the themes are equally relevant to the UK.

The Faraway Truth sounds as if it should be much better known here. Thank you for choosing it, Lynda.