THE LARK AND THE LAUREL by Barbara Willard. Reviewed by Ann Turnbull. 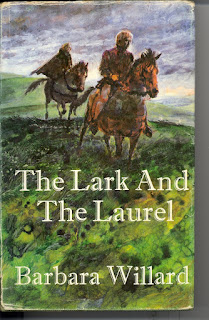 This is the first book in a series of historical novels set in the New Forest. Although there are no dates and very few historical names or facts in the narrative, it's clear at the start that Richard III has just been killed in battle and that his supporters - one of them our heroine's father - are fleeing for their lives. The king, however, is not named, nor the battlefield, nor any details of the political history - and this lack of information has the effect of plunging the reader into the real life of people at the time, when such detail may well have been hazy or unknown.

A distraught young girl, Cecily Jolland, is brought by her father from London to a house in the New Forest and forcibly handed over to an aunt she has never met before. Cut off from all normal life as she has known it, aristocratic Cecily has to adapt to a slower, more co-operative and down-to-earth way of life, with no servants to attend her. She learns new skills, meets new people, toughens up and - after much resistance - at last comes to love her new home.

She also falls in love with a neighbour. But there are secrets in Cecily's past, half-remembered events that recur as bad dreams. And she fears what may happen when her father returns...

This is history written from the inside: what it really felt like to be there. Barbara Willard describes the texture of the daily life of the forest people with either deep local knowledge or inspired research - and certainly with love for the place and its history.

Illustrations by Gareth Floyd.
Published by Longman in 1970.

Must say I like that title - and a world that absorbs the reader is always a pleasure.

Besides, how much of the detail of the big events going on in the country would people know - or see a benefit in knowing when there's the worry over the next crop to be sown or brought in or the health and the feeding of the beasts?

Thanks, Ann, for this suggestion.