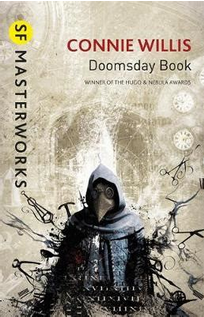 "People, mostly wearing masks, were out again, coming back from the grocer's and queuing in front of the chemist's. But the streets seemed hushed, unnaturally silent."
This is not a new book; it was first published in 1992, and it's been very successful so you might have read it already — but it merits re-reading as it's become so topical.
The novel is set in both the future and the past, though the future is now a good deal closer than it was in 1992. The world of 2054 is remarkably like 2020 in many regards, though there are a few amusing archaisms alongside rather astonishingly prescient details. Britain, or specifically, Oxford, of 2054 is in the grip of a pandemic. Simultaneously, the medieval history department of the university has dispatched a young historian, Kivrin, to the Middle Ages, intending to get her there in 1320. The rising panic of the modern pandemic is played out against the fears of  Kivrin's paternalistic and protective tutor Dunworthy that she might have been accidentally sent into the Black Death, 28 years later. By a strange coincidence, our own pandemic has come 24 years too early. Some of the technology, apart from the time travel, is plausible: the implanted recorder that lets Kivrin dictate her notes to her hand, the extension of the Tube out to Oxford. Other bits are slightly off: the characters use video phones but they are still landlines, remote access to the computer systems is pretty primitive and people walk between venues to pick up information written on pieces of paper. But these are minor points; only the primitive landline-equivalent of Zoom becomes distracting.
In Willis's pandemic, conspiracy theories and misinformation are as rife as they are in our own. People decide that it's a flu from India and so Indian people are stigmatized — even though early evidence suggests it originated in the USA. '"They're saying it's some sort of biological weapon... They're saying it escaped from a laboratory.'" EU sceptics jump on the bandwagon claiming the pandemic is a good reason to leave the EU. (OK, she was out a few years with that one.) People criticise the NHS (which is thankfully still going in 2054), defy the lockdown,  try to work around quarantine rules and struggle with their PPE and masks. I suppose the traits of exceptionalism and defiance are basic human characteristics that any good novelist would pick up on and corral into service in a situation like this, but it's rather satisfying to see them here. A priest comments that people will initially have a burst of enthusiasm for religion and will then take shelter and hide away. Medical refusniks are the anti-vaxxers of 2054; they refuse to comply with safety measures, many of them belonging to fringe religions. The disease spreads as easily as covid-19, with people contracting it after attending a dance, or bumping into an infected person in the street. There is even a shortage of eggs, masks and toilet paper. "'Why aren't you wearing your mask?'/'It causes my spectacles to steam up.'" Even the cock-ups are the same: "Colin brought the contacts charts. They were a disaster. No attempt had been made to correlate any of the information..."  It all looks horribly familiar.
While modern Oxford struggles with its pandemic, Kivrin has her own battles in the Middle Ages, with little going according to plan. Despite all the careful preparations by the history department, her knowledge of the period is far from perfect. She struggles when the small child she becomes increasingly attached to is injured and she recognises that contemporary medicine can do little for her. Knowledge, truth and misinformation are major themes in the novel. Kivrin's academic knowledge of Middle English and the Middle Ages, considered rock-solid fact in the world she left, turns out to be distorted and incomplete, arousing suspicion and causing her problems. How much of what we 'know' is not actually true? The science might, as in the case of the pandemic, reveal its errors in the end, but without time travel we will never know whether we have got history right. This concern with the contingency and elusiveness of truth is as modern a theme as the pandemic around which the book is built. And it's beautifully if accidentally illustrated in the edition shown here: the iconic plague-doctor mask used to conjur up the Black Death on the cover is anachronistic as it wasn't developed until the sixteenth century. I'd like to think that was deliberate, but it's probably just incompetence. Really, if you can face another pandemic or two this is worth a read or re-read.
Anne Rooney


Return to REVIEWS HOMEPAGE
Posted by Stroppy Author at 06:00 Permalink