THE SAGA OF ASLAK SLAVE-BORN by Susan Price. Reviewed by Ann Turnbull 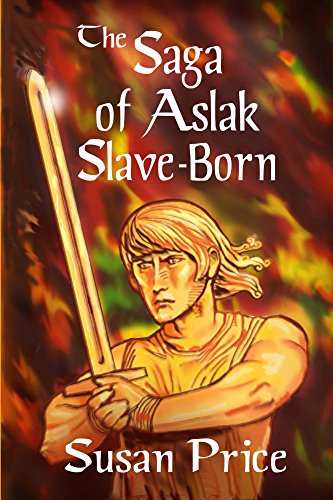 In this short book, Susan Price has created an engrossing story of loss and adventure. Sixteen-year-old Aslak - born a slave but freed by his father - sets off on a quest to find his sister Astrid. Until their father's death, Astrid and Aslak had lived at home with their father's legitimate children - but when teenage Aslak returns home from his first trading voyage he finds that his father has died and his brothers have sold Astrid into slavery.

Aslak's journey takes him to Norway and later to Jorvik (Danish York) in England. Aslak is hasty and quick-tempered and often antagonises people, but he has a friend - a shipmate, Thorgeir - who is more diplomatic and who joins him in his search. Later, Aslak is taken under the wing of an elderly woman, whose story reveals much about the lives and beliefs of the people - especially when his bond with her leads to her offering him an unwanted honour.

The narrative is rich in detail. We learn how people lived, how their houses were constructed, what their clothes and weapons were like. Most importantly, we briefly inhabit the world as they knew it.

Those who have read any of the Norse sagas will know that they are full of violence and danger but also strict codes of honour and kinship. What Susan Price has done in this short, accessible book is to write Aslak's story in the style of the sagas without any concessions to modern sensibilities. It all rings true.

Detailed historical notes are included at the end of the book.

This edition, available as both paperback and e-book, 2015.