THE FATED SKY by Henrietta Branford. Reviewed by Ann Turnbull 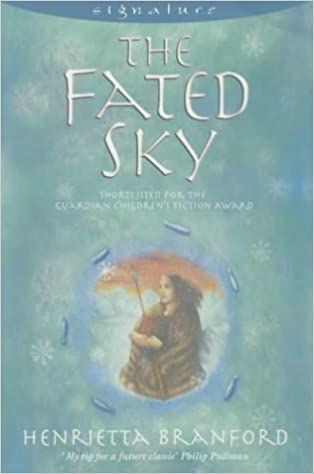 Described by the publisher as "an epic journey of love and survival", this short historical novel spans almost a lifetime.

Ran is a teenage girl in Viking Norway. Her family live by fishing and the few animals they keep. They have no slaves and only one servant. Ran has an uneasy relationship with her widowed mother, though she loves her grandmother, Amma.

The story begins when a stranger comes to their home. Vigut is handsome, strong and assertive. Ran discovers later that he is a man from her mother's past. Her mother had wanted to marry him, but he was poor, and the marriage was not allowed by her family. Right from the start, the mood of the story is ominous. Ran notices that Vigut's horse is not well cared for and shows marks of beating. This man is trouble.

Vigut travels with Ran and her mother to distant Sessing for the seasonal sacrifice to Odin. It soon becomes clear that Vigut plans to seize Sessing from its owner Finnulf. On the long cold journey the travellers are attacked by wolves, and Ran's mother is mortally wounded. She dies soon after they arrive, leaving Ran in danger, both from Vigut and from the terrifying wise-woman Gullveig. But it's also at Sessing that Ran meets Toki, the man she will come to love, and with whom she will travel to a new life and new adventures.

Although only 150 pages long, this is an epic story, full of action. It deserves to be read both for its historical drama and for the convincing portrayal of family relationships and of a young girl's troubled emotions. It has certainly made me want to seek out Henrietta Branford's other books.

First published by Hodder in 1996. Now available second-hand from Amazon.