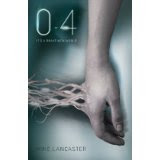 Mary Hoffman on her blog, THE BOOK MAVEN, quotes Julia Eccleshare at the London Book Fair saying this: "Big successes drive underground books we know are better." That struck me as so true and so apposite to lots of books I could name that I decided to write about this one.
Newspapers and websites and social networking sites are crowded with noise about such things as the HUNGER GAMES trilogy. There are flashy dystopias and science fiction books tied into films all over the place. This book has found its way, through the votes of young people in Lancashire, onto a prize shortlist but it's so enjoyable and has come out with so little fanfare (I'd never even seen it before it appeared on the shortlist) that I feel like drawing it to the attention of everyone.
I am not an SF fan and I'm not keen on fantasy either, for the most part, but this book is an accomplished debut novel and something that I'm sure a lot of boys as well as girls would enjoy.It's set in a future time and the whole story is presented as the findings of/research notes of an Editor. This Editor presents the contents of tapes made in the past. The past is our present and in the account given on them, a boy called Kyle Straker tells us what happens on one day when a friend of his hypnotizes four people as an 'act' in a local talent contest. The contest is an annual event taking place in a small Cambridgeshire village. The whole population of the place turns out to the Village Green to watch. Then something happens...
What follows is both scary and convincing and the idea behind this book is so terrific that I'm not going to say a single word about it. Suffice it to say that the title, 0.4, which at first I thought a bit silly and not very memorable, is EXACTLY right for the narrrative. The cover image too, which is hard to look at without squirming or flinching, is precisely true and horrifying.
I for my part was happy not to be snarled up as I often am when reading SF, in stuff I couldn't understand to save my life. It's a pleasure to read something so well, and clearly and modestly written. The novel has a very clever structure and fits together like good clockwork. The characters are believable and Kyle's voice is one that we like and can listen to for the length of the story. Do yourself a favour. If you have a young person of about 12 or older, buy this for them and read it yourself too!
Publisher: EGMONT Format: Paperback Price: £6.99 ISBN: 9781405253048

Return to REVIEWS HOMEPAGE
Posted by adele at 07:20 Permalink

I have tried several times over to change this text so that my paragraphing shows up but to no avail. ANY techno whiz who has a moment and feels like going in and trying to change this mess to what's actually on the 'drafts' page on Blogger has my full permission to do so. As I say, I tried A LOT and couldn't manage it. So sorry!And I will be out all day long....sigh and sob!

I think your review was so clear, coherent and well written that I did not even notice any lack of paragraphing! Sounds an absolutely stunning book - and the kind that needs more publicity!

Yes - this is a very tempting review. And now you have paragraphs!