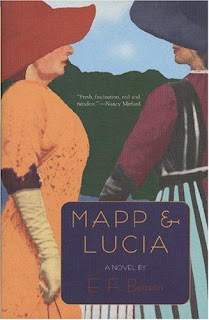 I love them so much I named my favourite chickens after them. They're not children's heroines - they're not especially heroic at all, except in perilous moments on upturned tables - but I believe that not just every teen but every human being should know them.
EF Benson wrote QUEEN LUCIA and MISS MAPP as separate self-contained books a couple of years apart, only bringing them together in the wake of Mrs Emmeline Lucas's widowhood and her move to Miss Mapp's hometown of Tilling (based closely on Rye, where Benson himself lived). The beauty of that move was in bringing together two characters who otherwise might have been too overpowering for their individual environments. Together, they are a collision of suns.
Mrs Lucas - Lucia - is the greatest arch-snob who ever lived: lover of Beethoven, Shakespeare and as little Italian as she can get away with. In two of Benson's six-book series - QUEEN LUCIA and LUCIA IN LONDON - she rules her charming little village of Riseholme unopposed, threatened only by the occasional rebellions of Daisy Quantock and of her own dear bachelor friend Georgie Pillson (and his crush, the wonderful visiting opera diva Olga Bracely).
Miss Mapp and Tilling, it seems, have always been waiting for her: a viciously civilised nemesis. When they come violently together in MAPP & LUCIA, the fallout is expressed in a brutal campaign of afternoon teas, bridge parties and evenings of po di musica - and the war for a particular lobster recipe a la Riseholme.
If it sounds twee and quaint, it ain't. Benson's genius was to make readers care desperately about these superficially awful characters - and I do care, over and over again. These six volumes are my comfort books, revisited more often than I care to remember and never, ever a disappointment. To use a terrible cliche, all of human life is here, despite the frozen nineteen-twenties English milieu.
The particular cleverness lies in the way Benson takes you to the limit of your sympathy - and then some - but abruptly, just as you long for the downfall of one character or another, Fate beats you to it. And miraculously, your love for whichever lady has been beastliest is restored, and you cheer them on to resurgence and new triumph.
It's impossible for me to sum up the charms of these books, but all of them lie in the characters. Despite the long-gone world of the setting, we all know a Mapp and we all know a Lucia. Please - if you don't already - get to know the fictional ones. You won't regret it. Or if you briefly do, you'll forgive them in the next five pages.
As for the chickens - my Lucia and Miss Mapp - I may even forgive them for eating the seedlings I planted just yesterday. Whatever their faults, those beastly hens are still my favourites - much like their namesakes. Au reservoir! 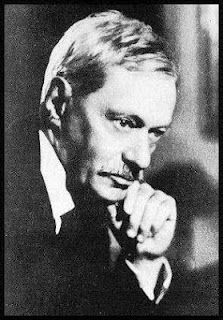 
Return to REVIEWS HOMEPAGE
Posted by Gillian Philip at 19:42 Permalink

I have been meaning to read these for DECADES. Must must must read them.

Oh Adele, you must! I promise you'll love them!

You are so right to suggest there are books such as these that teenage readers would enjoy or could certainly try out - for a change from grit and dystopia. Delightful books, Gillian.

Coming to this rather late - but which book should I read first, Gillian? Is it better to start at the beginning, or go straight to Mapp and Lucia?

Oh, I'm sorry Emma! I have only just come back and seen your comment! I'd read them in order, I think - Queen Lucia first. Then you'll be longing for her comeuppance just as she gets it! x