In The Trees by Pauline Fisk review by Lynda Waterhouse 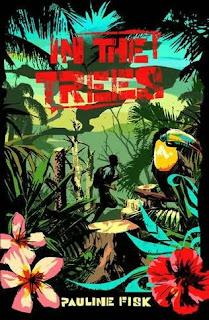 This is a wonderful story written with a lightness of touch that belies the profound themes that it contains. Race, class, the environment, absent fathers, the ethics of the gap year, even a touch of spirituality and mysticism is thrown into the mix of the story of lad, Kid Cato, as he journeys from boyhood to manhood.

The story begins with the arrival of a cardboard box containing his mother’s belongings where amongst the broken down electrical goods he finds a battered hat, a wedding photograph and his birth certificate which states that his father’s place of residence is a country that he has never heard of. A place called .

The minute he steps off the plane he smells the earthy and spicy smell of the trees and he finds himself vulnerable and alone. He truly is an innocent abroad and I felt genuinely scared for him as he navigated the maze of those people who were trying to part him from his money and those who were kind and concerned for him. His stay at the Night Falls Lodge was a terrifying experience.

In the jungle he meets up with a group of gap year students and at first dismisses them as a bunch of over-privileged do-gooders. Cato is particularly irritated by farmer’s boy Hal. The development of their relationship was one of the most powerful descriptions of the dynamics of hatred and male friendship that I have ever read.

Cato spends some time volunteering in a place called Blue Bank Springs where he learns to appreciate the value and the fragility of community and family. He meets and falls in love with a young woman called Renata. He even encounters a grey haired author on his travels!

His father finally tracks him down and there is an exquisitely written and painful sequence where Cato spends a night out with him.

‘Under the shade I flourish’ is the National Motto of Belize but I hope that this brilliant and moving novel finds its true place in the sun.

It sounds like a fascinating book and the cover alone makes me want to buy it.