In an Author’s Note at the end of this short novel, Pauline Francis writes: “I have exploited Elizabeth’s documented character to the full,” and all the readers who have followed the story of the young Princess through times of great danger will be even more impressed with this book. Francis writes very convincingly in the young Elizabeth’s voice. The book begins with a terrifying situation for the Princess on the morning of January 21st, 1549 and we are then taken back one year, to her fourteenth birthday. In the year that we’re going to live through, we meet villains and heroes, friends and enemies, and over the whole hovers the shade of Anne Boleyn, Elizabeth’s mother, whom she loves and whose fate she dreads. She says: I was only two when my father, the king, executed my mother, Anne Boleyn. People say she was a witch who stole his heart with her dark enchantments, but I can remember nothing of her. Yet still the malicious rumours of others haunt me. The whole story revolves around the young Elizabeth learning more about her mother and how true the hideous stories about her really are.

We have the advantage of knowing that she escaped Anne Boleyn's fate to become our most charismatic Queen, but still, there is suspense and tension and that’s down to Pauline Francis’s organization of her material. She’s very good at the detail of Elizabeth’s life: her love of pretty things, of perfume, of sweet things and something else that comes across well is the contrast between the opulence and ease of the palaces in which Elizabeth lives and the squalor, stench and poverty of places like Bedlam, which she visits on one memorable May night.

The supporting characters, Elizabeth’s servants, Francis, the boy who fishes corpses from the river but is Henry VIII’s illegitimate son, the horrible Thomas Seymour, Mary, her half-sister and the daughter of Catherine of Aragon and her friend Robert Dudley, come alive in the pages of this book and we can identify with Elizabeth as she negotiates her way through the network of allegiances and enmities of the Royal court.

This is the perfect book for anyone who loves a good historical novel. You can be sure of the facts and the imagination of the writer has made even more exciting a very exciting period. Usborne have published this book most beautifully, and even the young woman on the cover looks as though she might grow up, if not into Elizabeth herself, then at least into Cate Blanchett. They’ve provided a lot of information for budding historians at the back of the book about where they can find out even more about the Virgin Queen. There’s a good bibliography, (which I assume is the author’s) and this will certainly lead some readers on to further study. They might start with RAVEN QUEEN, (Francis’s previous novel and also very good) which is based on the life of Lady Jane Grey. Highly recommended for private reading and a good resource, also, for school bookshelves. 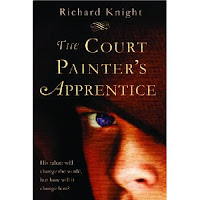 This has a very intriguing and period-appropriate cover of part of a young man's face. You'd be well-advised to look more closely at the pupil of his eye... I won't say more but it hints at something in the story you're about to read. This concerns Johann who is supernaturally talented and I use the word advisedly. Not only is he gifted as an artist but his brushstrokes can affect the future in mysterious ways. What he depicts often turns out to be true in the end.

Johann is fourteen and working in his father's inn at the beginning of the novel, drawing to amuse himself. Hugo, a master painter of the Painters' Guild in Ghent, sees Johann's work and recognises his talent. Hugo takes the boy under his wing and almost adopts him. Johann goes to live in Hugo's studio and learns his craft there. While he's doing so, we are given some detail of life in Ghent in the 17th century, and also shown round some existing masterpieces by Jan van Eyck, including the Arnolfini Marriage and the Altarpiece in the church of St Bavo.

The kind-hearted apprentice does his best to make the people he paints happy and subtly alters their fates by doing so. Hugo goes blind as he ages and when Johann paints a self portrait he at last learns to heed his master's advice: "Paint what you see, not what you want to see."

The style is plain and spare and the story moves along at a good pace. We're never too weighed down with detail. Perhaps we could have had more development of the various relationships in the novel and the whole thing could have done with being somewhat longer but that's not going to worry any children reading it. A very promising debut and Richard Knight writes well.

These are brilliant and enticing premises for novels, and I wish I'd thought of them myself.
I love the idea that the cover girl might grow up into Cate Blanchett.
I knew a family once where one of the daughters was the image of the young Elizabeth, and the mother was the image of the middle-aged Mary Tudor.
I found this extraordinary as Elizabeth and Mary were physically so unalike, but then I suppose all families are infinitely fascinating and mysterious.

These are both intriguing reviews, Adele, and I'm particularly attracted to Richard Knight's debut - you've said very little about what actually happens, yet implied deep mysteries. I haven't come across the publisher Catnip before... Oh wow, looking at their website shows I'm way behind the times.

Both these books sound fascinating, especially as they invite the reader into different worlds, both the partly-known Tudor court and the less-known artists studios in Ghent. Thanks for telling us about them. Equally intriguing!

Thanks for all these comments! Sally, fascinating about that family! A story there I think...