THREE CITIES AND A CASTLE? by Penny Dolan.

The Case of the London Dragonfish and The Case of the Glasgow Ghoul, both by Joan Lennon.
Castle of Shadows  and City of Thieves, both by Ellen Renner.
During the last month I’ve enjoyed two books by two children’s authors and I’m going to be greedy by mentioning all here. Although both authors both give a sense of the past, they offer two very different reading experiences. Books for different moods, in fact, and maybe for different ages and personalities.

The first two books, THE CASE OF THE LONDON DRAGONFISH and THE CASE OF THE GLASGOW GHOUL begin Joan Lennon’s lively “Slightly Jones” series, set in definitely Victorian times. 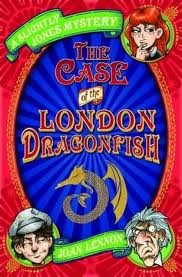 Slightly – “skinny and freckly and small, with hateful red hair and a pointy face like an inquisitive ferret” – is a girl who longs to be a detective like the great Sherlock Holmes and lives happily with her eccentric Granny Tonic and assorted lodgers at Limpopo House. Slightly’s curiosity sets her off on bold adventures with Granny and, occasionally and reluctantly, a young pickpocket named Matthew Bone.

In the first book, The Case of the London Dragonfish, an important new fossil in the Natural History Museum, disappears shortly before a Royal Private View and nice Mr Thurgood, one of Granny’s lodgers is wrongfully arrested. Slightly is very suspicious of Professor Octavian Snit of the Spirit House, the wonderfully creepy man in charge of the pale specimens preserved and pickled behind glass in a separate building. The entertaining plot twists and turns in a half-scary, half-rollicking way, and is laced with riddles, false clues and night-time adventures and more. 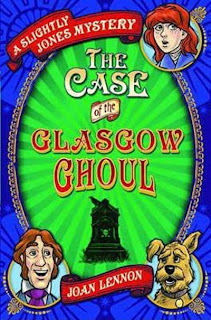 Cleverly, the ending leads directly into the plot of The Case of Glasgow Ghoul.

In this book,Slightly and Granny travel by train from London to Glasgow’s Hunterian Museum to investigate a strange collection of robberies, further complicated by rumours of ghosts among the tombs and mausoleums of the old burial ground.

Of course, Slightly can’t help investigating just where she shouldn’t . . .
Written in a light, pacey style, these books are enjoyable, escapist adventures but each plot introduces aspects of Victorian history to the young reader, with relevant Fascinating Facts and links to Slightly Jones own website: http://www.slightlyjones.co.uk/  at the back of the book. I suspect I might be introducing Slightly to a young history-mad relative before too long.

The next book in this series, THE CASE OF THE CAMBRIDGE MUMMY, is due out now..

My second two books are the powerful CASTLE OF SHADOWS and CITY OF THIEVES by Ellen Renner and these should definitely be read as a pair. 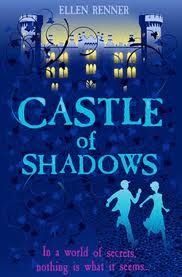 They are set in Quale, an eerie gothic kingdom, in an almost recognisable past. In Castle of Shadows, we meet Charlie, a young, half-starved princess whose runs riot through the dilapidated castle, Her mother, both scientist and Queen of Quale, has mysteriously disappeared. The whole castle is ruled over by the violent Mrs O’Dair, a housekeeper from nightmare. Charlie’s father, the King, has withdrawn from his duties and from Charlie. Instead he spends his hours building tall towers of cards even as, Charlie sooon discovers, the kingdom fills with rebellion. Impatient, prickly and proud, Charlie is determined to find out where her mother disappeared to and why, even though this means she has to ask for help from the gardener’s boy and one-time thief and lock-picker Tobias and brave the very rebels out to destroy the kingdom as she knows it. 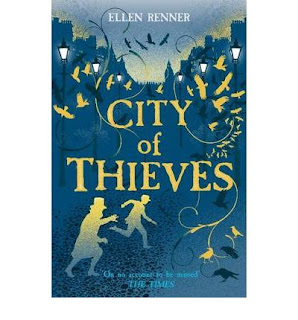 Once you have read Castle of Shadows, it is essential to read City of Thieves which is as much a strong companion piece as a sequel. Tobias Petch, the gardener’s boy, becomes the central character. He becomes, to his horror, implicated in the escape of the ex-Prime Minister Alistair Windlass – who Tobias has recently discovered to be his true father-  just before his hanging. To make things worse, when Tobias tries to hide in the crowded city, he is caught and reclaimed by his brutish Uncle Zebediah Petch and gang and forced to become an apprentice lock-picker. There seems to be no way out of this new life. Meanwhile, back at the castle, Charlie is more and more puzzled by what exactly the Dowager is planning, until the two young heroes meet again in spectacular fashion.

Wonderfully written and full of many interestingly dangerous and mysteriously kindly characters, shades of Aiken, Peake and even Lewis Carroll haunt Castle and City.

So, to conclude: three cities and a castle for you to enjoy.

Return to REVIEWS HOMEPAGE
Posted by Penny Dolan at 22:56 Permalink

Beautiful banner at your site as well, I am reminded of some wall paintings by the Mexican artist, Diego Rivera, such as this one http://EN.WahooArt.com/A55A04/w.nsf/OPRA/BRUE-8BWNY4. You browse more murals of his at wahooart.com.