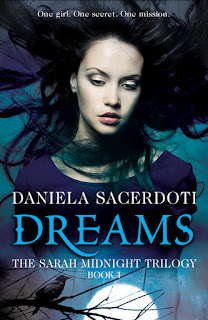 First, a declaration of interest: I got to know Daniela Sacerdoti (@danisacerdoti), as I have so many other good friends, on Twitter. She was kind enough to send me a copy of her adult novel WATCH OVER ME, which as an IVF veteran enthralled me while touching all kinds of chords, including umbilical ones (forgive the pun. Oh all right, don't).

So I was delighted and intrigued to hear that Daniela's next novel with Black and White Publishing was to be a YA paranormal thriller, DREAMS - the first in a trilogy about the enticingly named Sarah Midnight. Sarah, as it happens, is on Twitter too (@sarahmmidnight) - another of these wretched characters who slip the authorial leash to to dabble in social networking. (I can't imagine how any author could so ineptly lose editorial control over their own creations - right, @sethmacgregor?)

Sarah is a character who grows on you like a vine - slowly at first, with her understandable resentment at her deceased parents, who were so busy battling demons they forgot to teach her either about life, or about avoiding death. So nervous and scared and grief-stricken at the beginning of the book, she's outrageously OCD - I wish Sarah was in charge of cleaning my house - she has by the final chapter emerged from her self-imposed chrysalis a cold and violently determined butterfly. The reasons for her growth - which she has resisted for so long - I'm certainly not going to tell you. That would be Spoilers. But by the book's end, that creeping vine has wrapped itself round your throat, and you'll be as eager as I am for the sequels.

There's a host of marvellous supporting characters, from the mysterious Leaf - whose motives and loyalties remain shifting and nebulous even at the end of this book - to the mesmerising Harry, who isn't Harry at all. (Bear with me - and read the book, because I'm not going to explain myself here.)

As for the villains - well, it's always difficult to find monsters who are viler and more frightening with each paranormal book that's published. Trust me, the demons Sarah has to fight do not disappoint - you'll be anxiously watching your step the next time you walk on the soft peaty earth of a moor.


Return to REVIEWS HOMEPAGE
Posted by Gillian Philip at 23:13 Permalink

Fab review Gillian! Reading and enjoying this at the moment. Really liking 'Harry'!

Sarah Midnight is a fascinating character, (as is your Seth, of course!)
Such a shame I can't be there on 12th. Raise a glass to Daniela for me, Gillian!