A Gathering Light by Jennifer Donnelly. Reviewed by Sue Barrow. 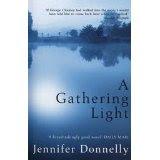 A Gathering Light is the story of sixteen year old Mattie Gokey, a lover of words and books, who dreams one day of leaving her backwater home town for college and independence in New York where she hopes to become a writer. Standing in her way is the promise she made to her dying mother to care for her younger sisters and overworked father after her mother’s early death.

The story, set in the Adirondacks at the start of the twentieth century, is fictional, but cleverly interwoven around the real-life murder of Grace Brown, a girl of Mattie’s own age. At first it appears that the girl has drowned in a boating accident. Mattie is working at the hotel where Grace Brown was staying with her fiancé and when her body is brought back to the hotel, Mattie is deeply affected by her sudden and shocking death. It is not until she reads the letters which Grace Brown entrusted to her that she begins to piece together the evidence which leads her to an altogether different conclusion. At the same time there is also a dawning awareness for Mattie that although their backgrounds are very different, Grace’s story and the choices open to her, run parallel to her own. As the story builds to its climax, Mattie is forced to decide what kind of future she wants - college and the opportunity to develop her writing gift or settling for what is expected of her, staying in Old Forge and marrying ‘the boy next door.’

The book flows in a wonderful way and although the chapters alternate between seasons, Donnelly’s use of past and present tense avoid any confusion and add to the emotional strength of the story. If I have a criticism it is that the narrative sometimes labours under the weight of the number of contemporary issues addressed - racism, female emancipation, family loyalty, not to mention bereavement and young love. But Mattie is a compelling character with an original voice and her interactions with Royal Loomis, the ‘boyfriend’, and her other peers, are authentic and convincing.

The story is sensitively and beautifully written, almost poetic at times, painting a true to life picture of small town America at the turn of the century. Jennifer Donnelly is not a prolific writer for the young adult market but having read this book twice and now thinking of reading her Tea Rose trilogy, I was left hoping that she might come back to A Gathering Light and think of adding a sequel. I for one would love to know what became of Mattie!

Return to REVIEWS HOMEPAGE
Posted by Sue Barrow at 08:00 Permalink

One of my favourite books ... and now you've made me want to read it all over again!

Glad about that Pippa. I think that's the mark of a really great book - you want to come back to it time and time again.

I really enjoyed this book although I had a slight quibble with the ending. But I'd better not say what it was here! A great read, though.

Thanks for this great review, Sue!

Sorry not to have picked this up earlier Emma. I thought the ending was very satisfying so I'm curious to know why you were unhappy with it. Please tell!

be quiet SUE or is that your real name