TITANIC – DEATH ON THE WATER By Tom and Tony Bradman. Reviewed by Saviour Pirotta

Today Awfully Big Reviews welcomes author Saviour Pirotta as a Reviewer. Saviour is known for his own storytelling in schools and for his host of retellings of folk and fairy tales. His recent titles include The Firebird, a picture book beautifully illustrated by Catherine Hyde (Templar) and a series of Grimm's Fairy Tales (Orchard) illustrated by Cecilia Johannson. Saviour reviews a book about a real event that has almost become a legend in itself. Welcome to Awfully Big Reviews, Saviour! 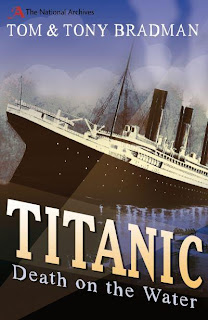 Ever since those distress rockets went up over the Atlantic in the early hours of the 15th April 1912, the world has been gripped by the story of the ill-fated Titanic. The event needs no introduction. Billed as unsinkable, the luxury liner left Southampton under the glare of the world’s media on the 10th of April, only to graze against an iceberg four days into its crossing and sink.  The loss of life was catastrophic, the outrage around the world unprecedented.
Within a month, a French film starring one of the survivors, Dorothy Gibson, opened to packed audiences.  It was followed by no less than 28 other big screen and television productions, ranging from serious documentaries shown in IMAX to frothy musicals.  There are also more than a thousand books dedicated to the  subject, as well as countless magazine articles, short stories, songs, video games, artworks and plays.
It’s easy to see why the story has taken a firm hold on our collective consciousness.  It has all the ingredients of a first-class soap opera.  The hubris of calling a liner unsinkable!  The exotic setting aboard a world-class luxury liner on its maiden voyage! A cast of interesting characters ranging from famous toffs dripping in jewellery to Liverpudlian workmen and penniless immigrants packed like sardines in the lower decks.
This year, of course, is the centenary of the catastrophe, and to mark the event, A&C Black have published TITANIC: DEATH ON THE WATER.  It’s written by the father and son team of Tom and Tony Bradman, and they have come up with a fast-paced, brilliant read that kids will lap up.
August Blom’s 1913 film, Atlantis, was the first to feature fictitious characters interacting with real-life ones who perished on the Titanic.  Its main characters were a couple embarking on a doomed love affair.  That leitmotif has been used many times now, most famously in James Cameron’s epic starring Kate Winslet and Leonardo DiCaprio.
The Bradmans’ book focuses on the children on the ill-fated liner, namely two boys who are employed as bellboys by the White Star Line Company. 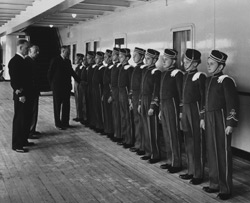 Billy Fleming has just lost his father to an accident in the shipyard where the Titanic is being built.  Convinced he’s too cowardly to survive in the macho atmosphere of the docks, he enlists on the Titanic in search of a cushier life as a bellhop.  There he runs into, and up against, George Anderson, a bully who is out to humiliate him.  The pair clashes in no uncertain terms. But when the Titanic hits the iceberg, they have more than each other to deal with, and both learn something about themselves that will have a major effect on the rest of their lives.
True-life stories usually need a lot of setting up but Tom and Tony Bradman waste no time before launching into this well-paced, well constructed adventure.  The first chapter sets the tone for the rest of the book, introducing us to a fast-moving plot as well as Billy, his family and life in the early twentieth century.
The seamless blend of factual detail and action means we get a clear picture of what happened without wasting time, and word-count, on historical data and technical jargon.   The Harland and Wolff shipyard in Belfast, the decks of the Titanic and the freezing Atlantic are all brought to life with the vividness of a cinema screen. Billy, his mates and the crew and passengers on the liner ring so true, it’s difficult to tell who was a real person and who is just a creation of the Bradmans'.
This is quite a short novel, so it’s perfect for reluctant readers as well as more book-friendly kids who like an exciting adventure.  It should win awards!
http://www.spirotta.com
http://pirottablog.com


Return to REVIEWS HOMEPAGE
Posted by Penny Dolan at 22:17 Permalink

For got to add that this is also a brillaintly topical review post, Saviour!