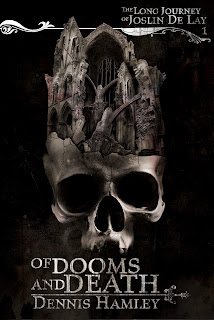 Some years ago I was asked the review The False Father, the last in Dennis Hamley's series of six medieval murder mysteries linked by a quest story.  I can't now remember much about that story except that I enjoyed it and wished I'd read the other five first.

Now, I'm glad to say, I shall have the chance.  The books have been out of print, but Dennis Hamley is gradually reissuing them as e-books under the title The Long Journey of Joslin de Lay.

The first two books, Of Dooms and Death and A Pact with Death, are already available.  They are Kindle editions - and the covers, by Anastasia Sichkarenko, are stunning. 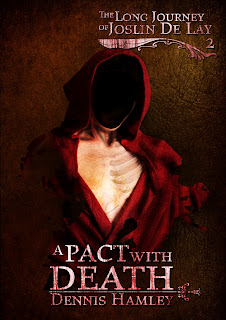 The books are set in the mid-1300s, when England and France were at war, and concern a 17-year-old French minstrel, Joslin de Lay, who escapes to England after the murder of his father.  England - an enemy country - might seem a bad choice, but Joslin is on a quest to find his lost mother, and his ultimate destination is Wales.  However, not only is Joslin, as a Frenchman, feared and threatened in England, but he has been followed there by a mysterious stranger.

Joslin's adventures begin in the East Anglian village of Stovenham, where two young artists from London are painting a Doom (a picture of the descent of dead souls into Hell).  He is befriended by the artists, but the locals are hostile to him.  And when a series of gruesome murders occurs, linked to the Doom, Joslin is suspected.  He is forced to flee to London, where he is immediately caught up in another series of murders, this time linked to the plague.

These fast-paced stories blend adventure, mystery, friendship and romance.  There is just enough detail about medieval life and beliefs to bring the period to life without overwhelming the narrative.  And, since Joslin is a minstrel, there are tantalising snatches of the songs he sings.  I found myself wishing the series came with a CD.

Published as a Kindle edition on Amazon, 2012.

Really agree about those covers!They bring out the excitement and danger of these excellent mysteries.