A Life of One's Own; A Review of Sylvia Townsend Warner's Lolly Willowes. By Ellen Renner 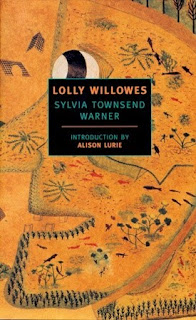 Writers make books but, equally, they are created by the books they read: stories that generate that spark of recognition, a sense of affinity of style, theme or treatment which is the literary equivalent of the beginning of a love affair.

I read Lolly Willowes for the first time while an undergraduate, but the author wasn't on the curriculum. Townsend Warner is too obstinate, too honest, too female and too eclectic – too varied in subject matter and style – to have been chosen by the Critics to slot into any of their canonical pigeon holes. What she was –  and is – is wonderfully, hilariously, humanely subversive. It's for that, as much as the indisputable elegance of her prose, that I love her writing.

Townsend Warner's working life as a writer began in the 1920s and only ended with her death in 1978. She was adept at nearly every literary form from diary and epistle to translation, poetry, short story and novel, having been frighteningly well-educated. (Her father, George Townsend Warner, was a master at Harrow).

Her first novel, the witty and outrageous Lolly Willowes, was published in 1926. It was an unlikely best-seller, being part whimsy, part fable and part feminist tract. Its exploration of the role of women in Edwardian middle-class society is a very English interpretation of themes explored in Kate Chopin's The Awakening; while its fantastical elements could be called an early example of magic realism. And in a feminist reversal of the Faustian contract, Laura sells her soul to the devil not for worldly goods and fame, but for solitude, independence and freedom.

When Laura's father dies, depriving her of both a socially acceptable role (his housekeeper) and home (inherited by her elder brother); she bows to her younger brother and sister-in-law's insistence that she join their London household and repress her personality to fit the role of spinster sister and aunt. All her sensuality, her vivid awareness of nature – all her individuality must be confined within the neat hat-box of a room and life doled out to her by family and society. While her sister-in-law Caroline ruminates on the practical implications, Laura is remembering her former self, the young witch:

The small spare-room would be rather a loss. They could not give up the large spare-room to Lolly, and the small spare-room was the handiest of the two for ordinary visitors. It seemed extravagant to wash a pair of large linen sheets for a single guest who came but for a couple of nights.
While these thoughts passed through Caroline's mind, Laura was not thinking at all. She had picked a red geranium flower, and was staining her left wrist with the juice of its crushed petals. So, when she was younger, she had stained her pale cheeks, and hand bent over the greenhouse tank to see what she looked like. But the greenhouse tank showed only a dark shadowy Laura, very dark and smooth like the lady in the old holy painting that hung in the dining-room and was called the Leonardo.

Even in prospect Laura finds city life antipathetic: ...in London there would be no greenhouse with a glossy tank, and no apple-room, and no potting-shed, earthy and warm, with bunches of poppy heads hanging from the ceiling, and sunflower seeds in a wooden box, and bulbs in thick paper bags, and hanks of tarred string, and lavender drying on a tea-tray.

The reality is numbing. Nineteen years and a war pass as Laura sleep-walks through life to the age of forty-seven, haunted by autumnal longings and repressed by her relations. One autumn, by the agency of chance (a theme underlying much of Townsend Warner's writing), Laura wanders into a florist's shop. The shop is 'half florist and half greengrocer' and filled with flowers, fruit, nuts, preserves: all the bounty of nature. It was as though the remnants of summer had come into the little shop for shelter...
Laura looked at the bottled fruits ... She thought of the woman who had filled those jars ... A solitary old woman picking fruit in a darkening orchard, rubbing her rough fingertips over the smooth-skinned plums, a lean wiry old woman, standing with upstretched arms among her fruit trees as though she were a tree herself ...
As Laura stood waiting she felt a great longing. It weighed upon her like the load of ripened fruit upon a tree ... She forgot that she was in London, she forgot the whole of her London life. She seemed to be standing alone in a darkening orchard, her feet in the grass, her arms stretched up to the pattern of leaves and fruit ...

Impulsively, Laura purchases a bunch of chrysanthemums and the flowers are wrapped up with several sprays of beech leaves. The autumnal orange and scent of the leaves transfix Laura: They smelt of woods, of dark rustling woods like the wood to whose edge she came so often in the country of her autumn imagination.

Finding that the branches come from the Chilterns, she buys a map of the district and comes to a life-changing decision. During dinner Laura looked at her relations. She felt as though she had awoken, unchanged, from a twenty-year slumber, to find them almost unrecogniseable. Laura announces her intention to go and live in the Chilterns' village of Great Mop. Most of her relations treat this as a joke, but her brother Henry is outraged by the suggestion.

'...you will do nothing of the kind. I'm sorry to seem harsh, Lolly. But you must put all this out of your mind.'
'Why?'
'It is impracticable.'
'Nothing is impracticable for a single, middle-aged woman with an income of her own.'

The reason for Henry's opposition becomes clear when he is forced to admit that he speculated with Laura's money and lost half of it. If Laura goes to Great Mop she will have half her expected income. Her dream of owning her own house and orchard is lost. But the nearness of freedom is too heady to let this sway her: She had forgotten Henry, and the unpleasant things she meant to say to him. She had come to the edge of the wood, and felt its cool breath in her face. It did not matter about ... the darkening orchard. If she were not to pick fruit from her own trees, there were common herbs and berries in plenty for her, growing wherever she chose to wander.

Laura makes good her escape. The tale of Laura setting up a new life as a witch is entertaining, as are her encounters with Satan as he helps her escape her relations (in the form of her visiting nephew, Titus) forever.

Laura's life as a witch secures her her freedom, although Laura could more accurately be described a 'wise woman', a herbalist, brewer and bottler, a gardener and gleaner of hedgerows. And this particular Satan is more closely aligned to Herne the Hunter than any demonic entity. The book is seeped in a particularly 1920s aesthetic of nature mysticism. In one of my favourite passages, the devil explains: 'Once a wood, always a wood.'

The words rang true, and she sat silent, considering them. Pious Asa might hew down the groves but as far as the Devil was concerned he hewed in vain. Once a wood, always a wood: trees where he sat would crowd into a shade. And people going by in broad sunlight would be aware of  slow voices overhead, and a sudden chill would fall upon their flesh. Then, if like her they had a natural leaning towards the Devil, they would linger, listening about them with half-closed eyes and averted senses; but if they were respectable people like Henry and Caroline they would talk rather louder and hurry on. There remaineth a rest for the people of God ... and for the other people, the people of Satan, there remained a rest also. Held fast in that strong memory no wild thing could be shaken, no secret covert destroyed, no haunt of shadow and silence laid open. The goods yard at Paddington, for instance – a savage place! as holy and enchanted as ever it had been. Not one of the monuments and tinkerings of man could impose on the satanic mind. The Vatican and the Crystal Palace, and all the neat human nest-boxes in rows, Balham and Fulham and the Cromwell Road – he saw through them, they went flop like card-houses, the bricks were earth again, and the steel girders burrowed shrieking into the veins of earth, and the dead timber was restored to the ghostly groves. Wolves howled through the streets of Paris, the foxes played in the throne-room of Schonbrunn, and in the basement at Apsley Terrace, the mammoth slowly revolved, trampling out its lair.

As Laura and Satan sit in companionable conversation on a Chilterns hillside, Laura explains the devil's appeal:

[Women] know they are dynamite, and long for the concussion that may justify them ... Even if other people still find them quite safe and usual, and go on poking with them, they know in their hearts how dangerous, how incalculable, how extraordinary they are. Even if they never do anything with their witchcraft, they know it's there – ready! ....That's why we become witches: to show our scorn of pretending life's a safe business, to satisfy our passion for adventure. One doesn't become a witch to run round being harmful, or to run round being helpful either, a district visitor on a broomstick. It's to escape all that – to have a life of one's own, not an existence doled out to you by others.

Lolly Willowes is a beautifully written, acutely observed and darkly humourous tale of an upper-middle-class Edwardian female who has the temerity to want a life of her own. There is an emotional truth and wry, melancholic wisdom at the heart of this book which seem exceptional considering the then age of the author.

Townsend Warner – several years before Virginia Woolf wrote about the necessity of a room of one's own – wrote a story about a witch which also happens to be a witty social satire and polemic on the right of women to be the protagonists of their own lives. Eighty-six years on, and the discussion continues: I recently wrote about the importance of female heroes in fiction for children on Katherine Langrish's wonderful Seven Miles of Steel Thistles blog. http://steelthistles.blogspot.co.uk/2011/02/fairytale-reflections-20-ellen-renner.html

Return to REVIEWS HOMEPAGE
Posted by Ellen Renner at 13:29 Permalink

I have this book but haven't found time to read it yet. But adore the same author's 'Kingdoms of Elfin' - so thanks for this reminder and I must put it closer to the top of the pile!

Kingdoms of Elfin - yes. My other favourite of STW's works. Need to re-read sometime soon.