A is for an Alligator named Alice: CHOMP!

“Mickey Cray had been out of work ever since a dead iguana fell from a palm tree and hit him on the head.” 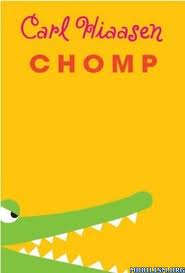 With an opening like that, it’s clear that CHOMP is a story that young teens and some pre-teens will have fun reading.

Set in adult author Carl Hiaasen’s own home landscape, CHOMP is a modern wild life melodrama, peopled with a mix of amazing characters.- Florida Gothic perhaps? It is written with humour and pace and just enough pathos and personal bravery to make this tall tale into an absolutely enjoyable adventure.

The central character, a young teen called Wahoo, helps his unpredictable animal-wrangler dad Mickey run a wild life care centre in Florida. Wahoo is all too aware that both money and the mortgage are big problem: his mum has to take a well-paying three-month contract in China so the family can pay some of their debts, and the park faces closure..

In her absence, Mickey and Wahoo successfully set up a stunt where a “wild-life expert” seems to wrestle against Alice the alligator, Mickey’s beloved star attraction. The shot is likely to be – after some clever cutting - so sensational that both father and son are asked to help with the animal filming in the Everglades for “Expedition Survival TV Show”. And they need the money.

Wahoo goes, not only for the sake of the crestures they take with them, but to protect his father from the mood swings after the above iguana incident. They end up taking the brilliantly quirky Tuna, a stray girl keeping clear of her brutal father, along with them for the trip.

The story gets even more complicated. The ghastly "expert " Derek Badger isn't one for camping. He is flown between his apparently wild location and the nearest luxury hotel accommodation. Only interested in himself and his ratings, hismain aim is to get the trademark shot where he eats some disgusting creature live on screen “to survive.” The crew are more than long-suffering.

There’s a host of other eccentric characters, like Link the angry loner who feuds with Mickey, and Raven the production manager whose red hair stays on perfect place throughout the expedition. There's lots of action, some even straying to the unbelievable when Badger suffers from eating the wrong thing.

As a reader, I constantly felt for the caring, good-hearted Wahoo, caught in the middle of all the conflict, along with his new friend, Tuna with her curiosity and knowledge of taxonomy and species.

Already a fan of Carl Hiaasen’s adult novels, I've read and enjoyed his previous two titles for younger people “Hoot” and “Scat”.CHOMP feels wilder and wackier than his two earlier books but also stronger in tone. Among the humour and the action, Hiassen makes clear his view of such sham wild life celebrities and the damage being done to the Everglades region by tourists, by released species and by development.

CHOMP is, I suspect, of a style of writing never likely to win a Carnegie, but as a novel that will take a reader far away from the weight of homework or a dull weekend, this is a perfect choice.

Return to REVIEWS HOMEPAGE
Posted by Penny Dolan at 11:00 Permalink

Never mind what's inside, I just love that cover! How fresh and different for a novel. Must look out for it, and see what lies behind the crocodile.