The Big Ugly Monster and the Little Stone Rabbit, by Chris Wormell: review by Gillian Philip 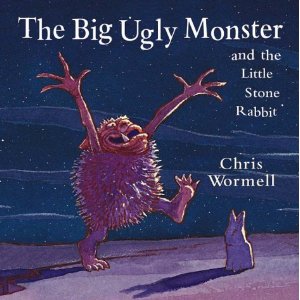 There’s always one. Yes: where there’s a book that isn’t just exactly what you might expect in a children’s title, there’s always an indignant parent demanding it be withdrawn from the school library so that nobody will be in danger of reading it.
I love Chris Wormell’s picture books, and so did my children as they were growing up. Neither George and the Dragon nor In The Woods deny the existence of big scary monsters, but both show that big scary monsters are not so scary that they can’t be faced - and that sometimes monsters can be frightened, too.
But the Big Ugly Monster (the one with the little stone rabbit) isn’t scary. He’s ugly - so ugly that even the weather and the landscape can’t bear him - but he isn’t frightening to the reader. To the reader he’s lonely, sad, but ineffably optimistic. Ponds dry up when he steps in them; the trees shed their leaves whenever he appears. The only things he has to talk to are bare rocks, but that doesn’t deter him: his great idea is to carve the rocks into friendly animals (though the back ends are the best bits, as that’s his normal view of animals).
I’ll be honest: when I got to this point, on my very first reading of the book, I was as full of optimism as the monster, who ‘was pleased with all his stone animals, and he smiled.’ And so did I, until the stone animals shattered in the face of that incredibly ugly smile. 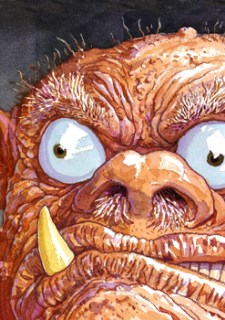 There’s only one stone animal that survives the smile, and that’s the little stone rabbit. Nothing the monster can do - dancing, singing, smiling an EXTRA BIG SMILE - can shatter the rabbit. Which is the point, in another book, when you might expect the little stone rabbit to come to life and be a real, breathing, talking friend to the Big Ugly Monster.
That’s what I love about this book: it just isn’t that simple. The stone rabbit doesn’t change - he doesn’t sing and dance and he doesn’t talk - but he doesn’t shatter either. Through all the years and seasons, he never shatters. Not even when--
But that would be telling.
This is one of those books where you get to the last page and you take a breath, because you can’t quite believe it. And then you might just cry. I’m warning you.
Now, I’m a mother. I understand that you might feel, reading this book, that your child isn’t quite ready for it, and for the questions it might provoke. Or more likely, you might decide you aren’t ready for that discussion yourself. That’s fair enough. I know I decided exactly that, at different points for each child.
Heck, I’m 48 years old, give or take, and there are nights I wouldn’t want it for my bedtime reading. But honestly, The Big Ugly Monster and the Little Stone Rabbit is one of the most beautiful books I have ever read. It still makes me cry. Get around to it some day: take a deep breath and have that talk about friendship, and loyalty, and loneliness, and what we leave behind us.
Just - whatever you do - don’t superimpose some simplistic message on this book. And - as one Amazon reviewer does - don’t, please, ever deny it to every other child in your local school. I only looked up the Amazon reviews because I was curious about this book's reception, and I’m still breathless with rage at that particular reviewer.
And if you’re one of the librarians who capitulated? Do the children in your care a favour, and think again.

Brilliant post, Gillian. You are so right - there is always one. I think that the more I see the wider world of people I might never have met in the old days before the Internet, the more I'm reminded that people have very different, and often bizarre (to the rest of us), ways of thinking. I think it does us no harm to be reminded of that every now and then, difficult as it makes life.

The book sounds fabulous and unusual and stimulating and intelligent and brave. Unlike the complaining parent.

I found the comments on that review heartening, though - at least the majority of people realise how fundamentally wrong it is to deny a book to all children simply because it made YOU uncomfortable.

The fact that the librarians removed it...eugh. Shame on them.

I had heard of this book before, but I hadn't realised it was such an interesting and different story. I will definitely seek it out now, thank you Gillian.

I don't know this one, though I too loved George and the Dragon, as did my kids. A book which provokes a similar reaction is Tadpole's Promise by Jeanne Willis and Tony Ross. My mum was horrified, my kids loved it. It was a great prompt for all sorts of deep conversations with my then three year old. Books should be challenging, even for pre-schoolers. They give us a way to learn and think about the world.

I don't know this book, but on the strength of your beautiful and sensitive review, Gillian, I will buy a copy and prepare to shed a tear.............

Interesting, Gillian. The whole world of picture books seems slightly blighted by a general assumption that picture books are ALL for the young 'uns (ie. pre-schoolers and pre-readers) although artists are often creating books for older children & older sensibilities. Although it sounds as if it the grown-up sensibilities that got the book banned. Was going to suggest "Will look for it in my local library . . ." Oh dear.

I adore his books - will have to get this one too.

We have this book and I agree with every word you said, Gillian. It is sad but in a happy-sad sort of way. After all, the monster makes his own happiness the best way he can. The end made me cry too but my kids LOVED the book and were not in any way traumatised by it. If someone wants it banned I suspect it is because they are unable to find the right words to talk about the (*cough* non spoiler) "issue" with their child.

Just read it to my little guy. Don't know what he made of it, but it affected me. Wasn't prepared for the ending.