The Case of the Good-Looking Corpse, by Caroline Lawrence: reviewed by Sue Purkiss

Caroline Lawrence is well known for her hugely successful Roman Mysteries books, but this book is the second in a series set in the (very) wild west: the P.K. Pinkerton Mysteries. P.K. is a twelve year old whose foster parents were killed at the beginning of the first book. For the detail you need to go back and read The Case of the Deadly Desperadoes, but in brief, in that story P.K. avenges himself on the eponymous desperadoes, and in so doing, settles on a new career as a detective - despite his youth.

In this second book, he gets his first case, when he's asked to solve the murder of a Soiled Dove (Lady of the Night, good-time girl, call Short Sally what you will - but 'Soiled Dove' works so much better.) It's not easy: there are multiple suspects - who could believe there would be so many men in Virginia City fitting the description of the killer: tall and slim with a billy-goat beard? Not only that, but P.K. is also being chased by a couple of the gang who killed his foster parents - and, even worse, there are all these girls who want to kiss him, when he absolutely HATES being touched! 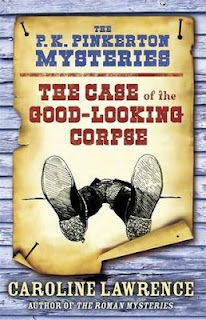 It's a terrific story, very pacey, full of danger and cliff-hangers, with an intricate plot and masses of atmosphere. But for me the best thing is the characters. There's a fantastic array of them - Soiled Doves, Celestials, a charismatic poker player who has taken P.K. under his wing, a doctor and a preacher who would both like to - and Sam Clemens, aka Mark Twain: a journalist completely without scruples who would instantly find a place on a News International paper. But best of all is P.K. himself, a really original creation and a very engaging narrator. P.K., as he tells us early on, has 'a Thorn'.

My Thorn is that people confound me. I am not good at reading people's faces & sometimes have trouble knowing if they are telling the truth or lying.


As well as my Thorn, I have some Foibles & Eccentricities.


One of my Foibles is that I get the Mulligrubs...

So - not perhaps obviously cut out to be a detective. But this is where his friends come in. For instance, Jace the poker player teaches him how to use body language to help him figure out if people are lying - and his foster mother has already taught him how to master a few basic facial expressions.

This extract also demonstrates what is for me the second-best thing: the language. Caroline Lawrence uses original spellings, newly created expressions and a sprinkling of capital letters which somehow convey remarkably well both the atmosphere of a mid-19th century frontier town, and P.K.'s very serious approach to life.

The P.K. Pinkerton Mysteries are original, they're page turners - and they're very funny. I'd recommend them very, very strongly for readers of eight and up. Fun to read aloud, too, with each chapter the perfect length to read at a sitting.

The Case of the Good-Looking Corpse, by Caroline Lawrence: published by Orion at £9.99 (hardback)

Now THAT is some recommendation, Sue!

I've been hearing such good things about this series - must try it! Love the 'Soiled Dove'!