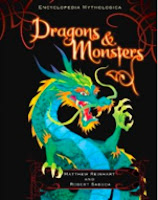 Dragons & Monsters is the third and final part of Reinhart's and Sabuda's Encyclopedia Mythologica series, and I don't mind admitting it's difficult for me to know exactly how to review this book. Do I approach it as an information text, a pop-up book, a work of art, or a feat of engineering?

In truth, I could describe it as any of those. It's certainly informative; each page is packed with information about monsters from legend - classical; European; Eastern: it's all here. It's interesting, and comes in bite-sized chunks so you can dip into it or read through, whichever takes your fancy.

Or, come to that, you can ignore the informative text - I wouldn't, but it won't be what catches your eye immediately. What you'll notice first is the pop-ups. Well - I say 'pop-ups', but that's a little like calling the Taj Mahal 'a building'. Each double-page is dominated by a spectacularly unfolding monster that appears too big to have fitted into the book. 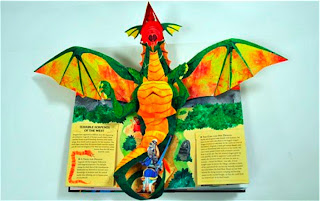 And this is where both 'work of art' and 'feat of engineering' come into the equation, because I'm not exaggerating when I call the monsters spectacular. They really are. As the book opens, so does Medusa's mouth, displaying her fearsome fangs. On other pages, a great dragon rears up, unfurling its wings; a coffin lid rises to reveal an emerging vampire; an enormous yeti stands tall, towering over the page, and lifts its fists threateningly. They are - as my daughter says - amazing. And if that was all the pop-uppery on display, that would be sufficient such amazement for one book. However, on each double-page at least one and sometimes as many as three of the text boxes are in fact little pop-up leaflets hiding another monster or two, each one skilfully engineered to make children & adults alike say, "Wow!"

Seriously, if you get the chance, grab a copy of this book. It's not cheap - £19.99 in hardback - but considering the craft that's gone into it and the pleasure you'll get from it, not to mention its value as a talking point, you'll consider it well worth it.


Return to REVIEWS HOMEPAGE
Posted by John Dougherty at 08:00 Permalink